Finally Discovered length of a day on Saturn

Posted on January 19, 2019 by Aerospace Engineering

Researchers believe they have solved finally a longstanding mystery of solar system science: the length of a day on Saturn. It’s 10 hours, 33 minutes and 38 seconds. It was possible thanks to new data from NASA’s Cassini spacecraft.

The figure has eluded planetary scientists for decades, because the gas giant has no solid surface with landmarks to track as it rotates, and it has an unusual magnetic field that hides the planet’s rotation rate.

The answer was hidden in the rings. During Cassini’s orbits of Saturn, instruments examined the icy, rocky rings in unprecedented detail. Christopher Mankovich, a graduate student in astronomy and astrophysics at UC Santa Cruz, used the data to study wave patterns within the rings. His work determined that the rings respond to vibrations within the planet itself, acting similarly to the seismometers used to measure movement caused by earthquakes. The interior of Saturn vibrates at frequencies that cause variations in its gravitational field. The rings, in turn, detect those movements in the field. “Particles throughout the rings can’t help but feel these oscillations in the gravity field,” Mankovich said. “At specific locations in the rings these oscillations catch ring particles at just the right time in their orbits to gradually build up energy, and that energy gets carried away as an observable wave.” 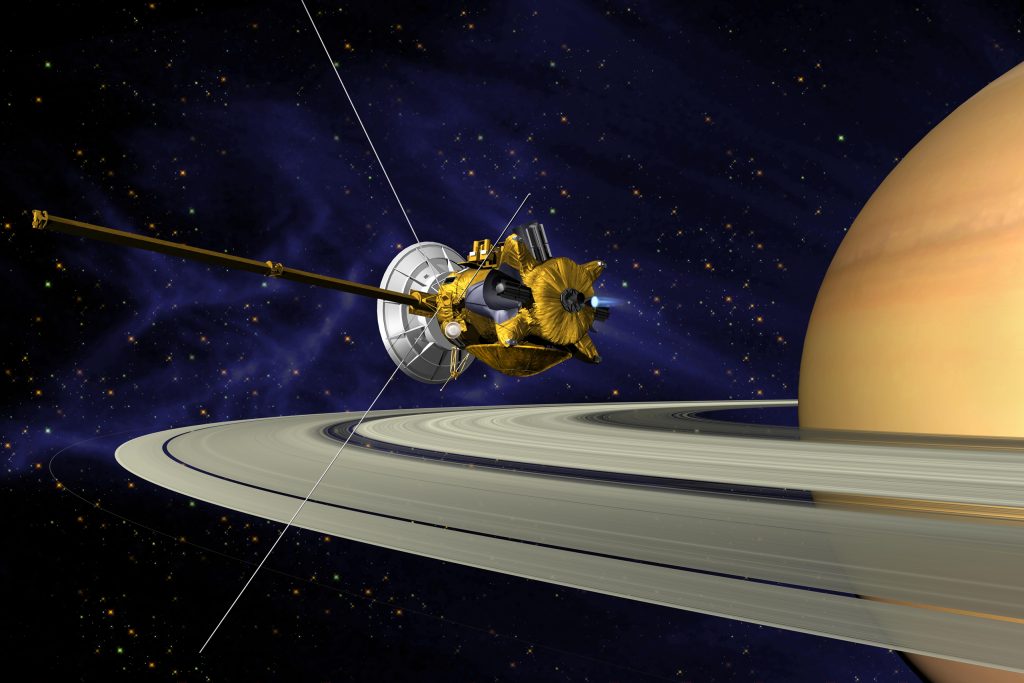 The Cassini–Huygens mission, commonly called Cassini, was a collaboration between NASA, the European Space Agency (ESA), and the Italian Space Agency (ASI) to send a probe to study the planet Saturn and its system, including its rings and natural satellites. Cassini was active in space for nearly 20 years, with 13 years spent orbiting Saturn, studying the planet and its system after entering orbit on July 1, 2004.The voyage to Saturn included flybys of Venus (April 1998 and July 1999), Earth (August 1999), the asteroid 2685 Masursky, and Jupiter (December 2000). Its mission ended on September 15, 2017, when Cassini’s trajectory took it into Saturn’s upper atmosphere and it burned up in order to prevent any risk of contaminating Saturn’s moons, which might have offered habitable environments to stowaway terrestrial microbes on the spacecraft

Mankovich’s research, published Jan. 17 by Astrophysical Journal, describes how he developed models of Saturn’s internal structure that would match the rings’ waves. That allowed him to track the movements of the interior of the planet — and thus, its rotation. The rotation rate of 10:33:38 that the analysis yielded is several minutes faster than previous estimates in 1981, which were based on radio signals from NASA’s Voyager spacecraft. The analysis of Voyager data, which estimated the day to be 10:39:23, was based on magnetic field information. Cassini used magnetic field data, too, but earlier estimates ranged from 10:36 all the way to 10:48. Scientists often rely on magnetic fields to measure planets’ rotation rates. Jupiter’s magnetic axis, like Earth’s, is not aligned with its rotational axis. So it swings around as the planet rotates, enabling scientists to measure a periodic signal in radio waves to get the rotation rate. However, Saturn is different. Its unique magnetic field is nearly perfectly aligned with its rotational axis. This is why the rings finding has been key to homing in on the length of day. Saturn scientists are elated to have the best answer yet to such a central question about the planet. “The researchers used waves in the rings to peer into Saturn’s interior, and out popped this long-sought, fundamental characteristic of the planet. And it’s a really solid result,” said Cassini Project Scientist Linda Spilker. “The rings held the answer.” The idea that Saturn’s rings could be used to study the seismology of the planet was first suggested in 1982, long before the necessary observations were possible. Co-author Mark Marley, now at NASA’s Ames Research Center in California’s Silicon Valley, subsequently fleshed out the idea for his Ph.D. thesis in 1990. Along with showing how the calculations could be done, he predicted where signatures in Saturn’s rings would be. He also noted that the Cassini mission, then in the planning stages, would be able to make the observations needed to test the idea. “Two decades later, in the final years of the Cassini mission, scientists analyzed mission data and found ring features at the locations of Mark’s predictions,” said co-author Jonathan Fortney, professor of astronomy and astrophysics at UC Santa Cruz and a member of the Cassini team. “This current work aims to make the most of these observations.” 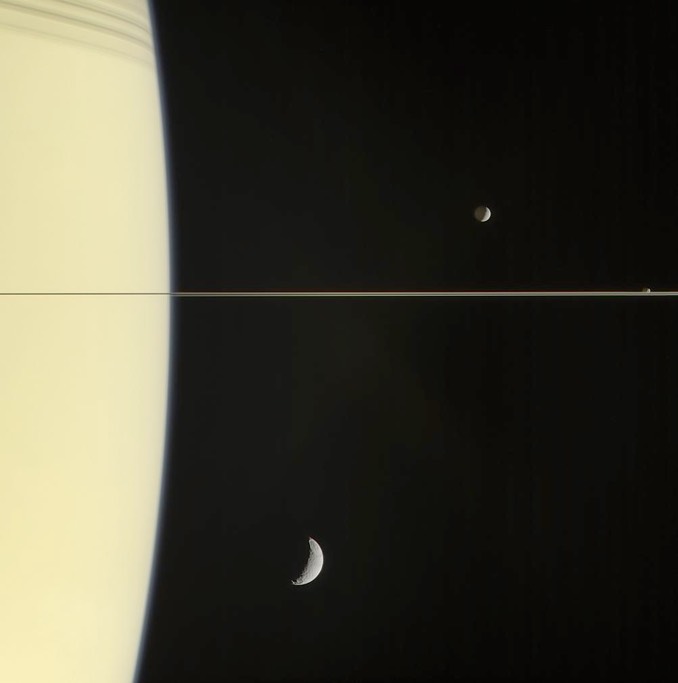 In this Cassini photograph, the moons Mimas and much smaller Janus are seen above the plane of Saturn’s edge-on rings with Tethys visible below. Cassini data shows the rings contain about 40 percent the mass of Mimas. Image: NASA/JPL-Caltech/Space Science Institute

Cassini’s mission ended in September 2017 when, low on fuel, the spacecraft was deliberately plunged into Saturn’s atmosphere by the mission team, which wanted to avoid crashing the craft onto the planet’s moons.