Posted on April 7, 2020 by Aerospace Engineering

The airline industry has been hit extremely hard by the COVID-19 crisis—even harder, perhaps, than by the events of 9/11 and the 2008 global financial crisis put together. With unprecedented consequences, many airlines have grounded all, or almost all, of the planes in their fleet. Several are now flying passenger aircraft as freighters. Most of the commercial, network, and operations teams are still scrambling to repatriate passengers and decide which flights to keep. Meanwhile, executives are in touch with governments, employee representatives, and suppliers to formulate responses under very dynamic circumstances.

The daily flights traffic is really dramatically decremented in the last 3 months. Below are reported the data extracted from ICAO (International Civil Aviation Organization) and from Statista.com. Globally the reduction are about the -47.7 %, with really drastic reduction for Italy (-89.2%), Germany (-88.6%), Spain (-88.5%) , meanwhile for US and China is respectively -23% and – 43.9% (last update on 30th March 2020). 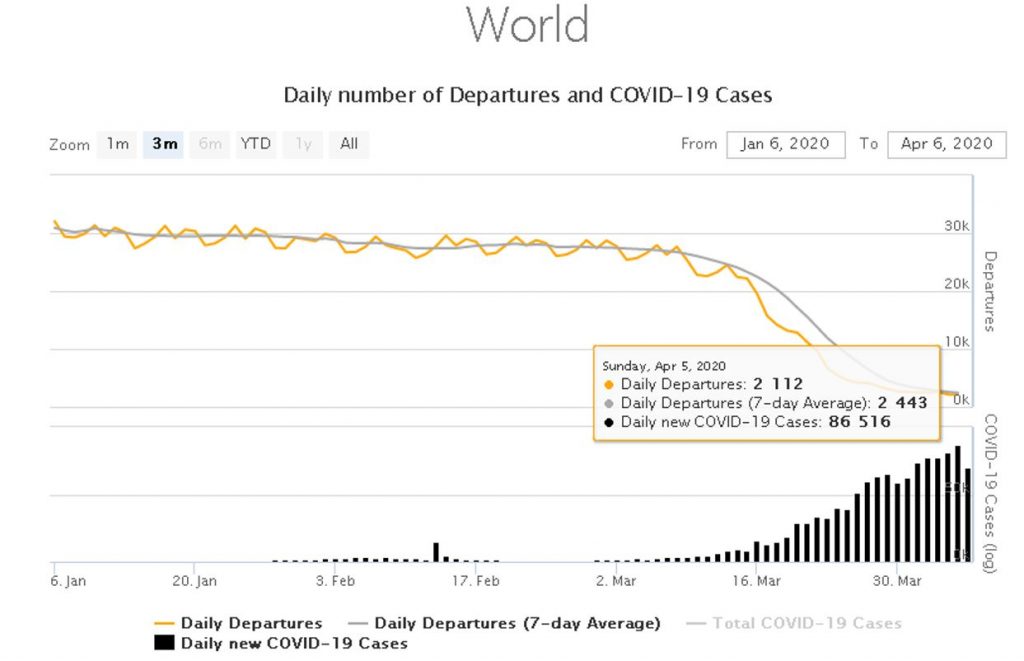 Below are reported the flight traffic in detail for each country. 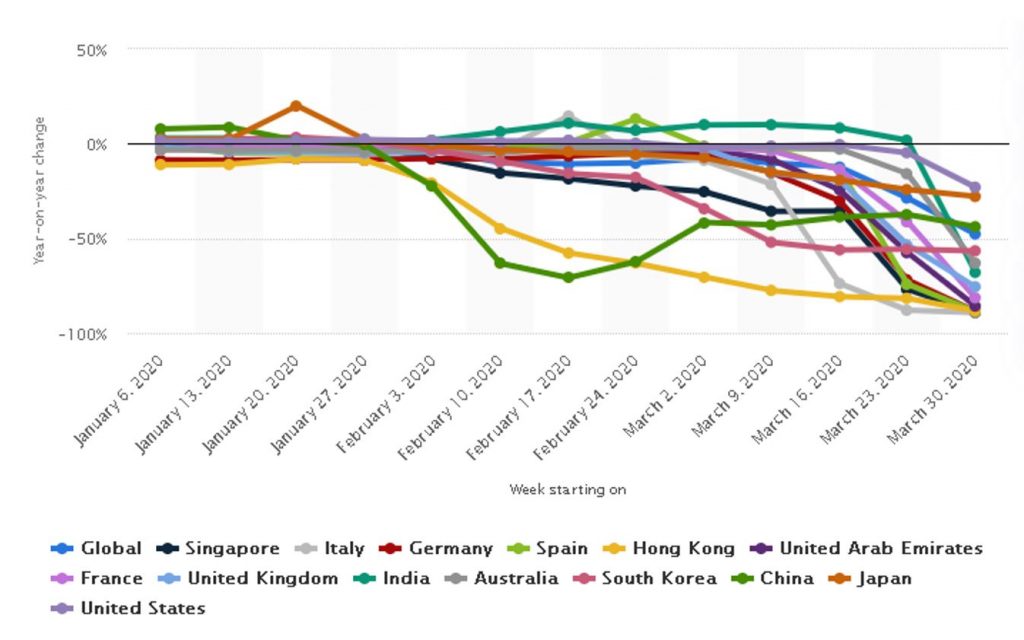 Without financial aid from their governments, half of the world’s approximately 800 airlines could be bankrupt by the end of May because of the unprecedentedly swift and deep drop in air travel demand amid the coronavirus pandemic, a decline that has exceeded the fright-driven falloff that followed the 9/11 terrorist attacks. That’s the assessment of the Centre for Asia-Pacific Aviation, a global airline consulting and analytics firm based in Sydney, Australia. CAPA’s conclusion that half the globe’s airlines are headed toward technical insolvency in less that 75 days is based off its analysis of the cash flow challenges now faced by 40 large and mid-sized airlines around the world plus projections stemming from that analysis for the rest of the global industry. “It’s a ‘no-brainer,’ really. Most of the 800 or so airlines in the world are going to fold if they have no income for three or four months,” said Peter Harbison, CAPA’s chairman. That’s because airlines are, from a financial structure perspective, heavily dependent on cash flow.
Because their primary assets – their aircraft – are 20-plus year assets, they must be financed via 20- to 25-year term loans or 12- to 15-year leases. Thus, airlines must continue to take in large enough streams of cash to make their substantial monthly loan or lease payments. But when planes get grounded, or have to operate with only a fraction of their normal passenger loads, carriers see their incoming cash fall instantly as their loan and lease payments continue. When that happens airlines can burn through their cash reserves quickly.

Future Scenarios
The most critical question today concerns the duration of the crisis in light of government responses and the progression of the virus. While we would all like to believe that the crisis will resolve within a matter of weeks, the reality is that we don’t yet know how long it will last. What’s more, the duration is likely to differ by region and by country.
Closely related to the duration of the crisis is the question of how quickly—and to what extent—air travel demand will recover. Data from previous crises, such as the SARS epidemic and the events following 9/11, shows how long it has taken the industry historically to return to pre-crisis levels. However, forecasts for the current crisis indicate that the duration and impact will be much more severe than any we’ve seen before. In mid-March, the International Air Transport Association (IATA) forecast a loss of $252 billion in revenue—44% of 2019 revenue. As a result, the industry may have to manage structural demand changes (such as the state of the economy—depression, recession, and rebound) and megatrends (such as the dramatic rise in remote working, more locally oriented supply chains, and a focus on sustainability). In addition, health concerns might initially curb passengers’ inclination to fly. According a study carried out by the Boston Consulting Group (bcg.com) is expected to see differences, in terms of duration and impact, between business and leisure travel for both short-haul and long-haul trips. For business demand, is expected a relatively quick rebound (in both short-haul and long-haul) as business travelers try to reestablish their businesses. However, the level of rebound will depend on the state of the economy and any long-term structural impact of remote working practices, which has yet to be determined and which will have to be assessed with consumer research. For leisure demand, it might see a distinction between short-haul and long-haul. For short-haul, is expected that many passengers will want to get away on trips after being housebound for weeks or months, once they are reassured that flying and traveling are safe again. Long-haul leisure usually takes more time to plan, so it is likely to rebound more slowly.
These differences are taken into account in the Boston Consulting Group’ scenarios, and they are tracking five potential scenarios: one, at this point, seems highly unlikely to occur; the other four are all possible, with the prolonged U-shape being the most likely, in their view. They are also tracking the indicators necessary for any given scenario to become reality. This model allows to forecast the demand outlook as accurately and dynamically as possible. 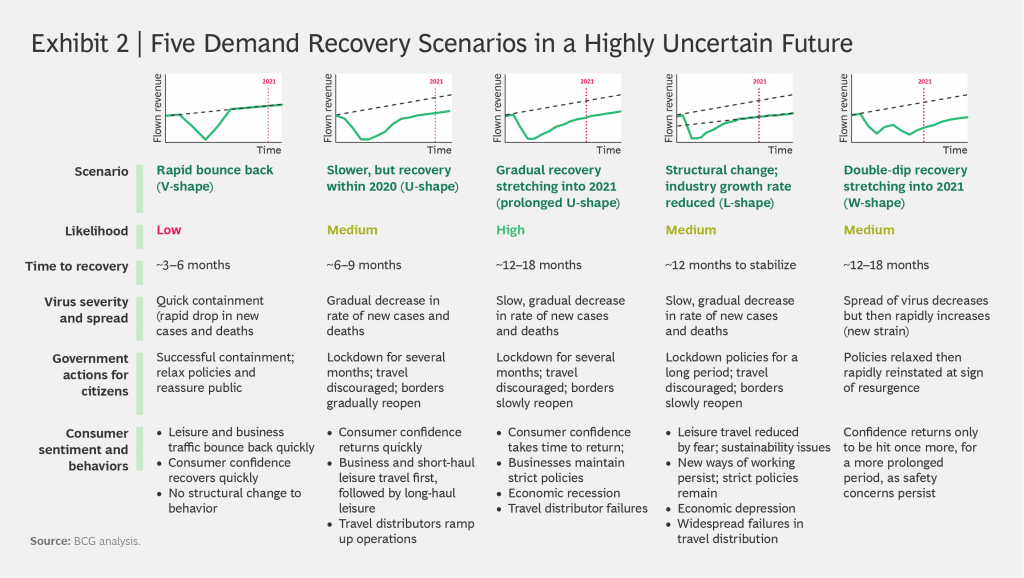 Which airlines will survive, and what will they look like? What will be the role of governments? Do we expect to see any consolidation? Again, it must be considered different duration scenarios. But likely, under any scenario, the industry will be forever changed, much as it was after 9/11 and the 2008 crisis.

Oil prices have fallen significantly (-$13/barrel Brent) since the beginning of the year. This could cut costs up to $28 billion on the 2020 fuel bill (on top of those savings which would be achieved as a result of reduced operations) which would provide some relief but would not significantly cushion the devastating impact that COVID-19 is having on demand. And it should be noted that hedging practices will postpone this impact for many airlines.

“The turn of events as a result of COVID-19 is almost without precedent. In little over two months, the industry’s prospects in much of the world have taken a dramatic turn for the worse. It is unclear how the virus will develop, but whether we see the impact contained to a few markets and a $63 billion revenue loss, or a broader impact leading to a $113 billion loss of revenue, this is a crisis.

“Many airlines are cutting capacity and taking emergency measures to reduce costs. Governments must take note. Airlines are doing their best to stay afloat as they perform the vital task of linking the world’s economies. As governments look to stimulus measures, the airline industry will need consideration for relief on taxes, charges and slot allocation. These are extraordinary times,” said Alexandre de Juniac, IATA’s Director General and CEO.

Aerospace Engineering-Training is an online learning platform. It is aimed at professional adults.
View all posts by Aerospace Engineering →
This entry was posted in News and tagged aircraft, Airline, COVID, COVID-19, flights, Future, Industry, planes, Scenarios. Bookmark the permalink.
← Quantum Internet: Physicists Have Found a New Method For Generating Quantum Entangled
The Sacrifice of Cassini – Documentary 2020 →