Posted on November 1, 2017 by Aerospace Engineering

Researchers of Lawrence Livermore National Laboratory in California have come up with a way to 3D print tough and flexible stainless steel, an advance that could lead to faster and cheaper ways to make everything from rocket engines to parts for nuclear reactors and oil rigs.
Stainless steel was first invented nearly 150 years ago, and it remains widely popular today. It’s made by melting conventional steel—itself a combination of iron and carbon (and sometimes other metals like nickel)—and adding in chromium and molybdenum, which prevent rust and corrosion. A complex series of cooling, reheating, and rolling steps gives the material a microscopic structure with tightly packed alloy grains and thin boundaries between the grains that create a cell-like structure. When the metal is bent or stressed, planes of atoms in the grains slide past one another, sometimes causing crystalline defects to connect with each other—producing fractures. But strong boundaries can halt these defects, making the material tough, yet still flexible enough to be formed into a desired shape. 3D printing researchers have long tried to reproduce this structure. Their setup starts with a powdery layer of metal alloy particles laid on a flat surface. A computer-controlled, high-powered laser beam then advances back and forth across the surface. Particles hit by the laser melt and fuse together. The surface then drops down a step, another layer of powder is added, and the laser heating process repeats, binding the newly melted material to the layer below. By repeating this tier-by-tier addition, engineers can build complex shapes, such as rocket engines. 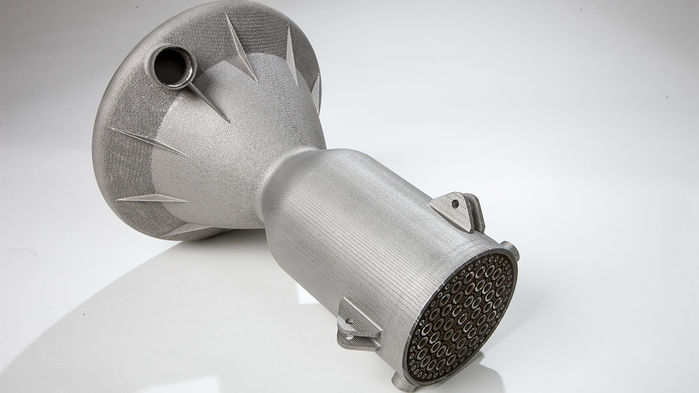 The problem has been that, on a microscopic level, printed stainless steels are usually highly porous, making them weak and prone to fracture. “The performance has been awful,” says Yinmin “Morris” Wang, a materials scientist at Lawrence Livermore National Laboratory in California. Several years ago, Wang and his colleagues came up with an approach for using lasers and a rapid cooling process to fuse metal alloy particles together in a dense, tightly packed structure. Now, they’ve extended that work by designing a computer-controlled process to not only create dense stainless steel layers, but to more tightly control the structure of their material from the nanoscale to micron scale. That allows the printer to build in tiny cell wall–like structures on each scale that prevent fractures and other common problems. Tests showed that under certain conditions the final 3D printed stainless steels were up to three times stronger than steels made by conventional techniques and yet still ductile, the scientists report today in Nature Materials. “What they have done is really exciting,” says Rahul Panat, a mechanical engineer at Carnegie Mellon University in Pittsburgh, Pennsylvania. What’s more, Panat says, is that Wang and his colleagues used a commercially available 3D printer and laser to do the work. That makes it likely that other groups will be able to quickly follow their lead to make a wide array of high-strength stainless steel parts for everything from fuel tanks in airplanes to pressure tubes in nuclear power plants. And that, in turn, will likely only increase the growing fervor over 3D printing.

Aerospace Engineering-Training is an online learning platform. It is aimed at professional adults.
View all posts by Aerospace Engineering →
This entry was posted in News and tagged 3D, new, stainless, steel, strength, technique. Bookmark the permalink.
← First flight of “BLADE” Laminar Flow Wing Demonstrator
How Fast Does Gravity Travel? →