What Exactly Is a Black Hole Event Horizon and What Happens There ?

Posted on April 10, 2019 by Aerospace Engineering

On Wednesday (April 10), the international Event Horizon Telescope project will release the first results from its plan to image black holes. But what exactly is an event horizon?

According to Einstein’s theory of special relativity, nothing can travel faster through space than the speed of light. This means a black hole’s event horizon is essentially the point from which nothing can return. The name refers to the impossibility of witnessing any event taking place inside that border, the horizon beyond which one cannot see.

“The event horizon is the ultimate prison wall — one can get in but never get out,” Avi Loeb, chair of astronomy at Harvard University, told Space.com.

When an item gets near an event horizon, a witness would see the item’s image redden and dim as gravity distorted light coming from that item. At the event horizon, this image would effectively fade to invisibility.

Within the event horizon, one would find the black hole’s singularity, where previous research suggests all of the object’s mass has collapsed to an infinitely dense extent. This means the fabric of space and time around the singularity has also curved to an infinite degree, so the laws of physics as we currently know them break down.

“The event horizon protects us from the unknown physics near a singularity,” Loeb said.

The size of an event horizon depends on the black hole’s mass. If Earth were compressed until it became a black hole, it would have a diameter of about 0.69 inches (17.4 millimeters), a little smaller than a dime; if the sun were converted to a black hole, it would be about 3.62 miles (5.84 kilometers) wide, about the size of a village or town. The supermassive black holes that the Event Horizon Telescope is observing are far larger; Sagittarius A*, at the center of the Milky Way, is about 4.3 million times the mass of our sun and has a diameter of about 7.9 million miles (12.7 million km), while M87 at the heart of the Virgo A galaxy is about 6 billion solar masses and 11 billion miles (17.7 billion km) wide.

The strength of a black hole’s gravitational pull depends on the distance from it — the closer you are, the more powerful the tug. But the effects of this gravity on a visitor would differ depending on the black hole’s mass. If you fell toward a relatively small black hole a few times the mass of the sun, for example, you would get pulled apart and stretched out in a process known as spaghettification, dying well before you reached the event horizon.

However, if you were to fall toward a supermassive black hole millions to billions of times the mass of the sun, you wouldn’t “feel such forces to a significant degree,” Loeb said. You would not die of spaghettification before you crossed the event horizon (although numerous other hazards around such a black hole might kill you before you reached that point).

Black holes likely spin because the stars they generally originate from also spun and because the matter they swallow whirled in spirals before it fell in. Recent findings suggest that black holes can rotate at speeds greater than 90 percent that of light, Loeb said.

A spinning black hole also forces the fabric of space-time around it to rotate with it, a phenomenon known as frame dragging or the Lense-Thirring effect. Frame dragging is also seen around other massive bodies, including Earth. 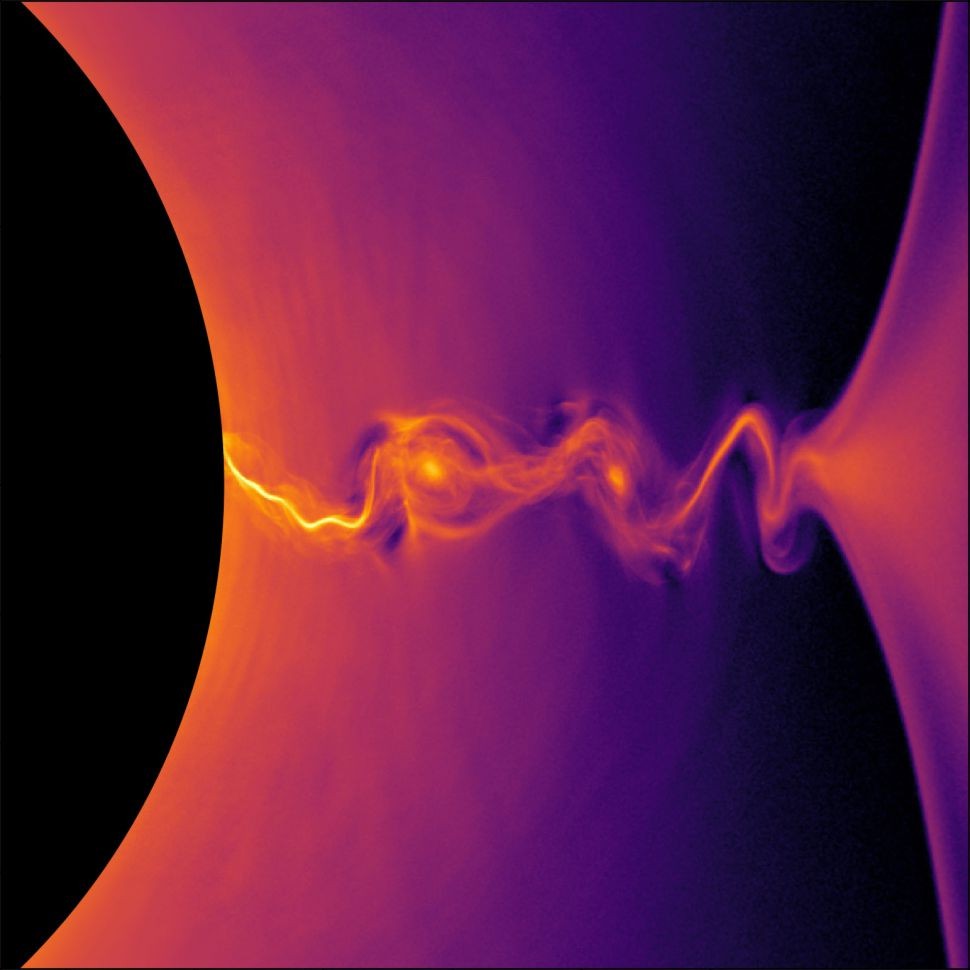 “This has important implications for the environments around black holes,” Loeb said. “The amount of energy from the supermassive black holes at the centers of virtually all large galaxies can significantly influence the evolution of those galaxies.”

Recent work has greatly upset the conventional view of black holes. In 2012, physicists suggested that anything falling toward a black hole might encounter “firewalls” at or in the vicinity of the event horizon that would incinerate any matter falling in. This is because when particles collide, they can become invisibly connected through a link called entanglement, and black holes could break such links, releasing incredible amounts of energy.

However, other research seeking to unite general relativity, which can explain the nature of gravity, with quantum mechanics, which can describe the behavior of all known particles, suggests that firewalls may not exist — because event horizons themselves may not exist. Some physicists suggest that instead of abysses from which nothing can return, what we currently think of as black holes may actually be a range of black-hole-like objects that lack event horizons, such as so-called fuzzballs, Loeb said.

By imaging the edges of black holes, the Event Horizon Telescope can help scientists analyze the shapes and behaviors of event horizons.

“We can use these images to constrain any theory on the structure of black holes,” Loeb said. “Indeed, the fuzzball speculation — where the event horizon is not a sharp boundary, but is rather fuzzy — could be tested with images from the Event Horizon Telescope.”

Aerospace Engineering-Training is an online learning platform. It is aimed at professional adults.
View all posts by Aerospace Engineering →
This entry was posted in Technology & Science and tagged Black, Event, Exactly, Happens, hole, Horizon, What. Bookmark the permalink.
← ATR Working On Launch Orders For Short-Field 42-600
Quantum Device to Examine All Possible Futures →