Posted on June 11, 2017 by Aerospace Engineering

The US Air Force’s mysterious X-37B space plane just landed after a record-breaking 718 days in orbit, but we still have no idea what it was doing up there. As officials remain tight-lipped about what the unmanned drone was doing up there for so long, rumours have been circulating that the military might be testing NASA’s EM Drive in space. Can we solve two mysteries in one?
The U.S. Air Force’s unmanned X-37B space plane has flown four clandestine missions, carrying secret payloads on long-duration flights in Earth orbit. The robotic vehicle resembles NASA’s famous space shuttle but is much smaller. The X-37B is about 29 feet (8.8 meters) long and 9.5 feet (2.9 m) tall, with a wingspan just less than 15 feet (4.6 m). At launch, it weighs 11,000 lbs. (4,990 kilograms).
The X-37B’s payload bay (the area in which the cargo is packed) measures 7 feet long by 4 feet wide (2.1 by 1.2 m) — about the size of a pickup truck bed. Just what the X-37B carries in there is unclear, however. Air Force officials generally comment only on the overall goals of the program, stressing that each payload is classified. “The primary objectives of the X-37B are twofold: reusable spacecraft technologies for America’s future in space and operating experiments which can be returned to, and examined, on Earth,” states an X-37B fact sheet produced by the Air Force.
Like the space shuttle, the solar-powered X-37B space plane launches vertically, with the aid of a rocket, and cruises back to Earth for a runway landing. The diminutive space plane is designed to operate at altitudes ranging from 110 to 500 miles (177 to 805 km). 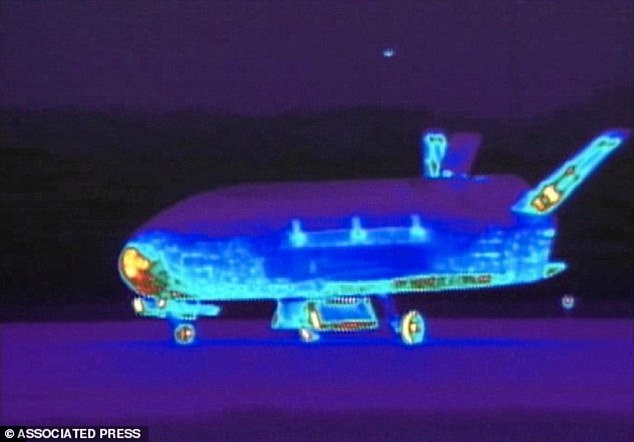 A Brief History of the X-37B

The X-37 program started in 1999 with NASA, which initially planned to construct two vehicles: an Approach and Landing Test Vehicle (ALTV) and an Orbital Vehicle. NASA transferred the project to the U.S. military in 2004 — specifically, the Defense Advanced Research Projects Agency (DARPA). At that point, X-37 became a classified project. DARPA finished the ALTV part of the program in 2006, conducting a series of captive-carry and free-flight tests. NASA’s envisioned Orbital Vehicle was never built, but it served as the inspiration for the space plane that came to be called the X-37B. The X-37B program is now run by the Air Force’s Rapid Capabilities Office, with mission control for orbital flights based at the 3rd Space Experimentation Squadron at Schriever Air Force Base in Colorado. The space planes are built by Boeing’s Phantom Works division. This research involved graphene-oxide, which is considerably easier to produce as its made by oxidation in the laboratory. By precisely controlling the pore size in the membranes, it was possible to sieve out common salts from water, and make it safe to drink. Tiny capillaries in the graphene-oxide membranes stop the salt from flowing, while letting water pass through. This type of graphene can more easily be made permeable, allowing holes smaller than one nanometer to be made, which are necessary to stop the flow of salt. “This is the first clear-cut experiment in this regime,” Professor Rahul Nair, at The University of Manchester and a co-author on the study, said in a statement. “We also demonstrate that there are realistic possibilities to scale up the described approach and mass produce graphene-based membranes with required sieve sizes.” The United Nations estimates that by 2025, 14 percent of the world’s population will have to deal with water scarcity, largely due to climate changes. But water filtration is notoriously difficult, requiring costly desalination plants. Graphene-oxide may provide a rather more affordable solution.

The secrecy surrounding the X-37B and its payloads has spawned rumors that the vehicle could be a space weapon of some sort, perhaps tasked with capturing or damaging other nations’ satellites.But the space plane is likely too small and not maneuverable enough for such work, experts say. Instead, its chief mission is likely what Air Force officials have claimed all along: to test out new sensors and other next-generation satellite technologies, to see how they perform and hold up in the space environment.
“I absolutely think that’s the primary mission,” former Air Force orbital analyst Brian Weeden, who now works as a technical adviser for the nonprofit Secure World Foundation, told Space.com just before the launch of OTV-2. Various other aspects of the X-37B’s design would make it a less-than-ideal space weapon, he added — including the craft’s shuttle-style runway landings, which leave it vulnerable to attack by hostile forces. “It can be tracked, so it’s going to be hard for it to sneak up on anything,” Weeden said. “And when it comes down itself, it’s a very ungainly, slow-moving glider.”

Aerospace Engineering-Training is an online learning platform. It is aimed at professional adults.
View all posts by Aerospace Engineering →
This entry was posted in News and tagged 37B, mystery, Nasa, plane, Space, X, X-37B. Bookmark the permalink.
← Weigh a Star With Gravity
AI to Build Autonomous Space Probes →