Aerion AS2 – the supersonic business jet

Posted on March 18, 2016 by Aerospace Engineering

The Aerion AS2 is a supersonic business jet designed by Aerion Corporation scheduled to enter service in 2023. The unit cost is estimated to be US$120 million and was first announced during September 2014, with test flights expected to start in 2019. The AS2 (in collaboration with Airbus) designed to accommodate up to 12 passengers, will fly at a speed of Mach 1.5 and the wing design will allow for lighter fuel consumption and increased travel ranges by reducing aerodynamic drag by 20%. Aerion’s AS2 program will formally launch in mid-2016 when the company selects a location for a new manufacturing plant somewhere in the U.S. They will break ground on the assembly site in 2018, with the goal of completing the first flight of the Aerion AS2 in 2021, and the first commercial flight with FAA certification in 2023. In November 2015, Flexjet confirmed that they had placed a firm order valued at $2.4 billion for twenty Aerion AS2s, with delivery to begin in 2023. It uses the supersonic laminar flow technology (SNLF),that allow efficient cruise just below the speed of sound and at supersonic speeds up to Mach 1.5. The unique unswept wing has SNLF on a majority of its surface (where it offers 90 percent friction drag reduction). Under laminar flow conditions, air flows smoothly across wing surfaces without creating turbulent layers, as do conventional swept or delta wing designs. To minimize technical risk, the aircraft incorporates known technology: an aluminum fuselage and lightly swept carbon wings. The biggest challenge for this project are the engines. Initially, it was to be powered by two low-bypass Pratt & Whitney JT8D-219s, each rated at 18,000 lb. thrust. But than due to global environmental concerns ensured that future engines, the future aircraft has been powered by three new-technology engines able to meet more demanding noise requirements. For this type of aircraft, is needful a low- to medium-bypass engine for efficiency at transonic and supersonic speeds. Pratt & Whitney, General Electric and Rolls-Royce all have modern engines that could conceivably be adapted to serve. NASA is working with Lockheed to design a “low boom” supersonic flight demonstration aircraft that can produce additional positive attention to this market. 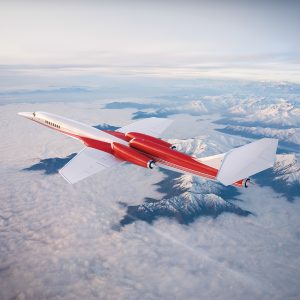