Posted on August 7, 2019 by Aerospace Engineering

Airbus has unveiled a bird-like concept for a hybrid-electric airliner that aims to show the potential of using biomimicry in aviation design.

Inspired by the “efficient mechanics” of birds, Airbus’ Bird of Prey conceptual aircraft features wing and tail structures with individually controlled feather-like tips, which help with control while minimising drag.

The concept also boasts a smooth wing root – the point where the wing joins the fuselage – designed to imitate the graceful, aerodynamic arch of an eagle or falcon.

The feathered tips of the plane’s tail are decorated with the pattern of a union jack, which contrasts with its orange body and more subtly coloured blue, white and gold wings.

While not intended to represent an actual aircraft, the Bird of Prey concept is based on realistic ideas. Its designers are aiming to provide an insight into what the future of aviation could look like if designers harnessed the potential of biomimicry – design inspired by nature.

The ‘#BirdOfPrey’ is taking wing! This sleek new concept takes inspiration from eagles to create a hybrid-electric design with individually controlled feathered wings. We’re always looking for pioneering new ideas – what would your aircraft be inspired by? https://fly.airbus.com/2xSKQ7c 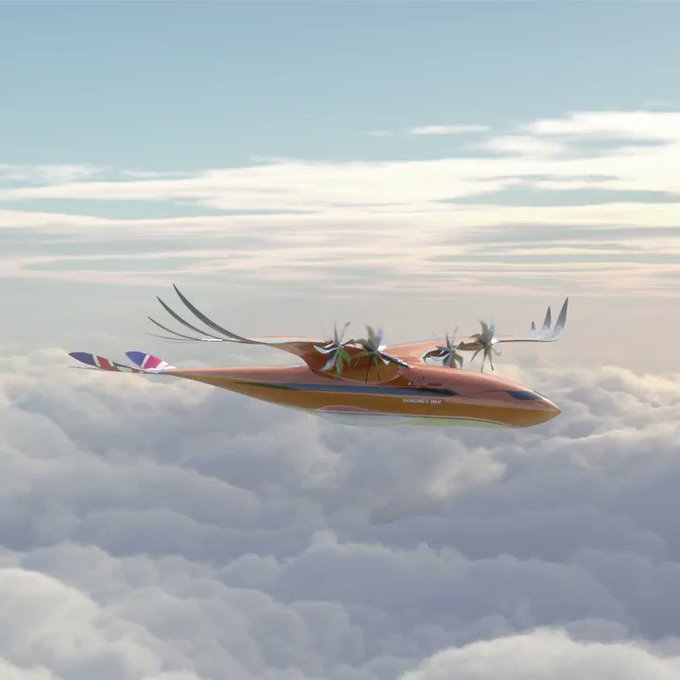 “Our Bird of Prey is designed to be an inspiration to young people and create a ‘wow’ factor that will help them consider an exciting career in the crucially important aerospace sector,” said Martin Aston, a senior manager at Airbus.

“One of the priorities for the entire industry is how to make aviation more sustainable – making flying cleaner, greener and quieter than ever before,” he continued.

“We know from our work on the A350 XWB passenger jet that through biomimicry, nature has some of the best lessons we can learn about design,” added Aston.

The plane would be able to accommodate up to 80 passengers, and would have a range of 1,500 kilometres.

Thanks to its hybrid-electric propulsion system the Bird of Prey would burn 30 to 50 per cent less fuel than todays airliners do, providing optimal low-speed performance while working to reduce environmental emissions.

This electric system would power propellers made of carbon fibre, and would also produce less noise than typical aircrafts.

Also looking to the future of air travel, design studio Layer developed a smart seating concept earlier this year for use in Airbus’ economy class, which would allow passengers to monitor and control their seat conditions using their phone.

Around the same time, in February, Airbus announced it was ceasing production of the A380 – the world’s largest passenger aircraft. We spoke to Paul Priestman, who designed the superjumbo’s first interior, about the plane’s design legacy.