Hubble Telescope: How it Works?

Posted on August 19, 2019 by Aerospace Engineering

Orbiting high above the Earth, the Hubble Space Telescope has a clear view of the universe free from the blurring and absorbing effects of the atmosphere. In addition to observing visible and near-infrared light, Hubble detects ultraviolet light, which is absorbed by the atmosphere and visible only from space. The telescope has beamed hundreds of thousands of celestial images back to Earth during its time in space.

Hubble is a Cassegrain reflector telescope. Light from celestial objects travels down a tube, is collected by a bowl-like, inwardly curved primary mirror and reflected toward a smaller, dome-shaped, outwardly curved secondary mirror. The secondary mirror bounces the light back to the primary mirror and through a hole in its center. The light is focused on a small area called the focal plane, where it is picked up by its various science instruments.

Hubble’s 1,825 pound, 7.8-foot (2.4-meter) diameter primary mirror collects light from its astronomical target and reflex it to a 12-inch (0.3-meter) diameter secondary mirror located in the optical tube. This secondary mirror then reflects the light through a hole in the primary mirror to form an image at the telescope’s focal plane. There it is intercepted by pick-off mirrors that pass it into the scientific instruments. Hubble’s mirrors are made of ultra-low expansion glass kept at a “room temperature” of about 70°F (21°C) to avoid warping. The reflecting services are coated with a 3/1000,000-inch layer of pure aluminum and protected by a 1/1000,000-inch layer of magnesium fluoride that also makes the mirror is more reflective to ultraviolet light.

Hubble’s science instruments, the astronomer’s eyes to the universe, work together or individually to provide the observations. Each instrument is designed to examine the universe in a different way. Hubble holds two main varieties of instruments: cameras, which capture Hubble’s famed images, and spectrographs, which break light into colors for analysis.

These are not the only instruments that have flown aboard Hubble. The telescope was designed to be visited periodically by astronauts, who brought new instruments and technology, and made repairs from December 1993 to May 2009.

After launch in April 1990, NASA discovered that the primary mirror was flawed. The flaw was tiny, only about 1/50th

the width of a human hair, but significant enough to distort Hubble’s vision. During Servicing Mission 1 in December of 1993, astronauts added corrective optics to compensate for the flaw. The optics acted like eyeglasses to correct Hubble’s vision. 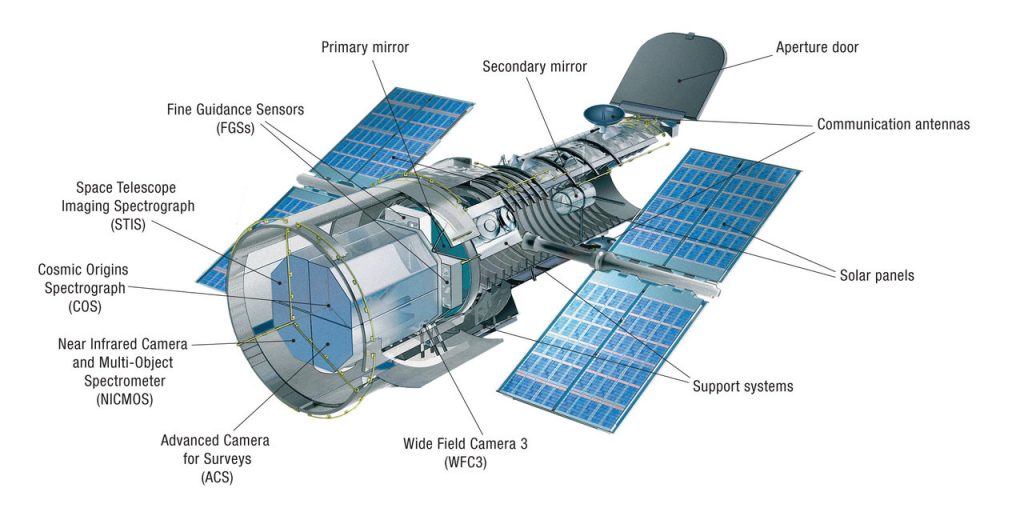 Hubble’s Control and Support Systems and Instruments Diagram
The forward shell houses the telescope’s optical assembly. In the middle of the telescope are the reaction wheels and the bays that house the observatory’s control electronics. The aft shroud houses the scientific instruments, gyroscopes, and star trackers.

Hubble is operated by commands from the ground. Several spacecraft systems are in place to keep Hubble functioning smoothly.

Hubble performs in response to detailed instructions from people on the ground. The antennas allow technicians to communicate with the telescope, telling it what to do and when to do it. Four antennas receive and send information to a set of satellites, which in turn communicate with Earth.

Hubble is powered by sunlight. Each wing-like array has solar cells that convert the Sun’s energy into electricity. Some of that electricity runs the telescope, some is stored in onboard batteries for the periods when Hubble is in Earth’s shadow.

Several computers and microprocessors reside in Hubble’s body and in each science instrument. There are two main computers. One talks to the instruments, sends commands and other information, and transmits data; the other handles pointing control, gyroscopes and other system-wide functions.

Hubble has blanket of multilayered insulation, which protects the telescope from temperature extremes.

Hubble uses a combination of gyroscopes, reaction wheels and Fine Guidance Sensors to orient itself. 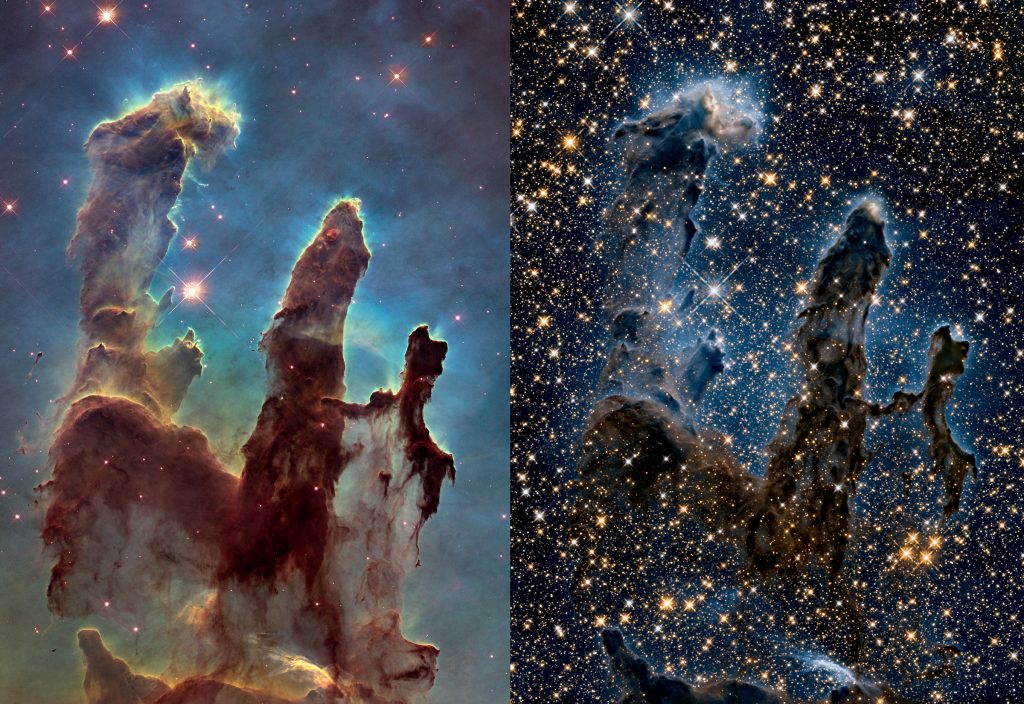 Hubble is one of NASA’s most successful and long-lasting science missions. It has beamed hundreds of thousands of images back to Earth, shedding light on many of the great mysteries of astronomy.

Hubble has shown scientists galaxies in all stages of evolution, including galaxies that were around when the universe was still young, helping them understand how galaxies form. It found protoplanetary disks, clumps of gas and dust around young stars that likely function as birthing grounds for new planets. It discovered that gamma-ray bursts — strange, incredibly powerful explosions of energy — can occur in far-distant galaxies when massive stars collapse. And these are only a handful of its many continuing contributions to astronomy. 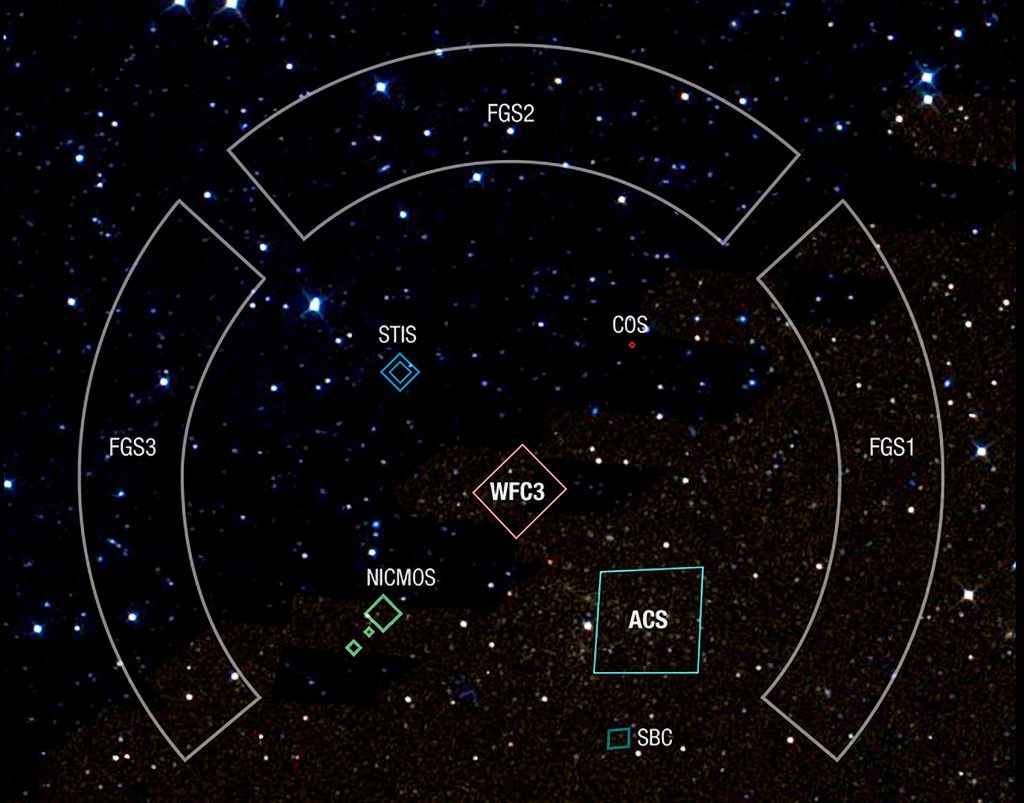 The telescope is an instrument for the entire astronomical community. Any astronomer in the world can submit a proposal and request time on the telescope — alone or in coordination with other observatories in space and on the ground — as well as for support to make use of Hubble’s extensive data archives. Astronomers compete for time to use Hubble.

More scientists want to use the telescope than time allows, so a review committee of astronomy experts has to pick out the best proposals from the bunch. To avoid bias, the competition process is double-blind. This means that not only are proposers unaware of the identity of the reviewers, but the reviewers are also not aware of the identities of proposers.

The winning proposals are the ones that make the best use of the telescope’s capabilities while addressing pressing astronomical questions. Each year around 1,000 proposals are reviewed and approximately 200 are selected, for a total of about 20,000 individual observations.

Hubble was designed to hold six science instruments, each observing the universe in a unique way. The telescope has cameras, which capture Hubble’s famed images, and spectrographs, which break light into colors for analysis. The current suite of instruments is listed below. 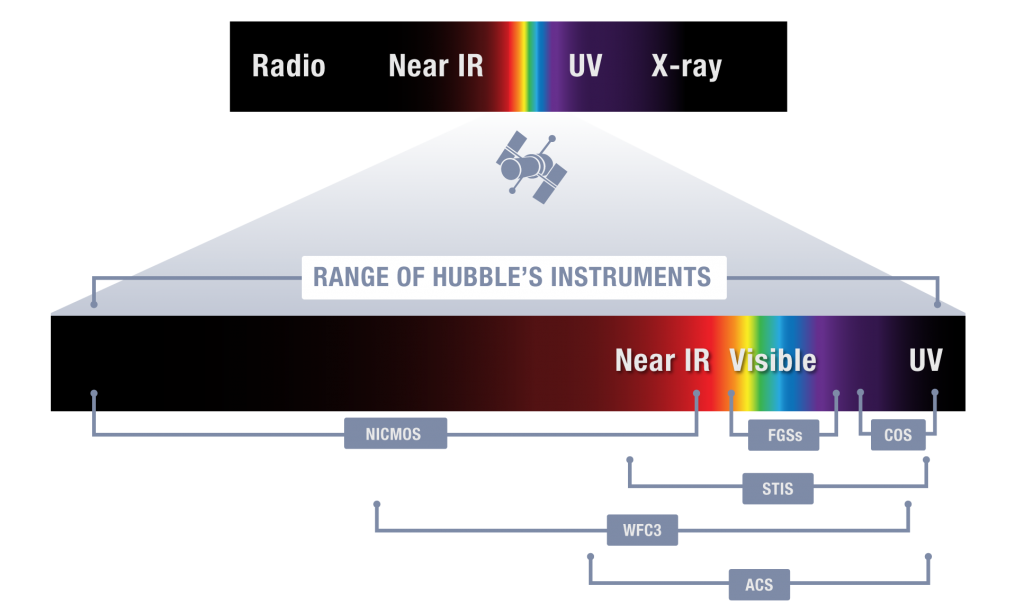 Hubble’s instruments collectively observe wavelengths (measured in nanometers) from ultraviolet through infrared. Each instrument was designed to operate in a particular wavelength range and function as an imaging camera or a spectrometer, though some instruments do both. The Fine Guidance Sensors (FGSs) not only help the telescope stay locked on target, but can be used as science instruments to accurately determine the relative position of stars.

Wide Field Camera 3 (WFC3) expanded Hubble’s reach by giving the telescope greater access to ultraviolet, visible and infrared wavelengths of light. With its high resolution and wide field of view, WFC3 has become the telescope’s workhorse camera, responsible for many of Hubble’s spectacular pictures. It has imaged everything from nearby star formation to galaxies in the very distant universe.

The Cosmic Origins Spectrograph (COS) breaks ultraviolet radiation into components that can be studied in detail. COS is best at studying points of light, like stars or quasars (distant galaxies emitting tremendous amounts of light from their central regions). It has been used to study galaxy evolution, the formation of planets and the rise of the elements needed for life.

The Advanced Camera for Surveys (ACS) conducts surveys of the universe. It is responsible for many of Hubble’s most impressive visible-light images of deep space. With its wide field of view, sharp image quality, and high sensitivity, ACS helps map the distribution of dark matter, detects the most distant objects in the universe, searches for massive planets and studies the evolution of clusters of galaxies.

The Space Telescope Imaging Spectrograph (STIS) combines a camera with a spectrograph, which provides a “fingerprint” of a celestial object’s temperature, chemical composition, density and motion. STIS also reveals changes in the evolving universe and leads the way in the field of high-contrast imaging. The versatile instrument is sensitive to a wide range of wavelengths of light, from ultraviolet through the optical and into the near-infrared. STIS studies black holes, monster stars, and the intergalactic medium, and analyzes the atmospheres of worlds around other stars.

Near Infrared Camera and Multi-Object Spectrometer

The Near Infrared Camera and Multi-Object Spectrometer (NICMOS) is sensitive to infrared light, which is perceived by humans as heat. Infrared light reveals details about distant galaxies, planets and solar systems and star formation that are not available in visible light. It observes objects hidden by interstellar dust, such as site of stellar formation. The instrument sports three cameras — each with different fields of view. NICMOS operated from 1997 to 1999, and from 2002 to 2008.

Hubble’s three Fine Guidance Sensors (FGS) — its targeting cameras — are devices that lock onto guide stars and keep Hubble pointed in the correct direction. Two of the sensors point the telescope at an astronomical target and then hold that target in a scientific instrument’s field of view. The third sensor is available to perform scientific observations, precisely measuring the distance between stars and their relative motions. 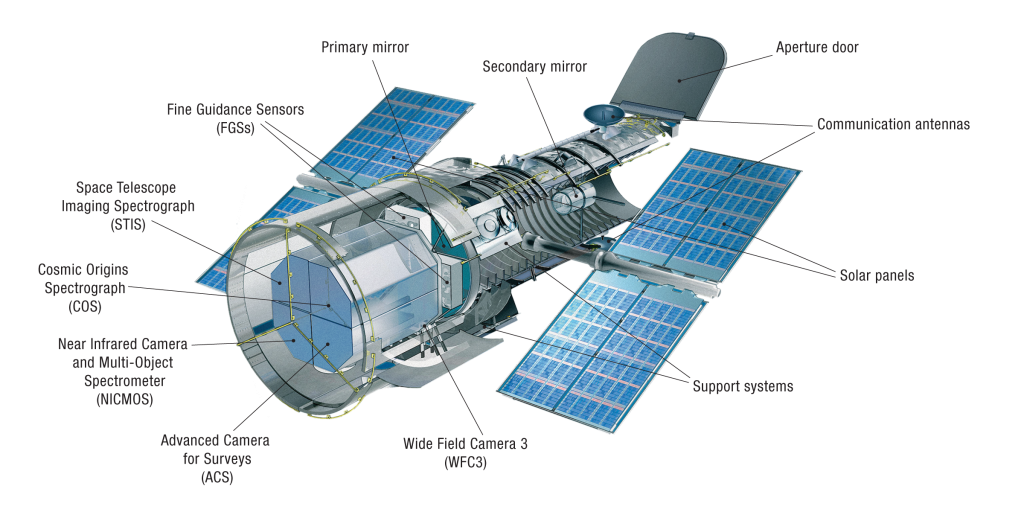 This diagram shows the locations of Hubble’s instruments inside the telescope. The instruments are located in containers that make them easy to remove and replace. Credit: NASA, ESA.

Hubble’s primary mirror is 7.8-feet (2.4-meters) in diameter. It is made of a special glass coated with aluminum and a compound that reflects ultraviolet light. It collects light from the telescope’s targets and reflects it to the secondary mirror.

Like the primary mirror, Hubble’s secondary mirror is made of special glass coated with aluminum and a compound to reﬂect ultraviolet light. It is 12 inches (30.5 centimeters) in diameter and reﬂects the light back through a hole in the primary mirror and into the instruments.

Hubble’s aperture door can close, if necessary, to prevent light from the Sun from entering and potentially damaging the telescope or its instruments.

Digital images and spectra stored in Hubble’s solid-state recorders are converted to radio waves and then beamed through one of the spacecraft’s high-gain antennas (HGAs) to a NASA communications satellite, which relays them to the ground. Because the HGAs would extend off the page above and below the spacecraft image, they are shown here pressed against the side of the telescope in their “berthed positions.” This is how they were configured at launch.

Hubble’s current set of rigid solar panels use gallium-arsenide photovoltaic cells that produce enough power for all the science instruments to operate simultaneously. The first and second sets were larger, flexible panels, but produced less power.

Essential support systems such as computers, batteries, gyroscopes, reaction wheels, and electronics are contained in these areas.

Aerospace Engineering-Training is an online learning platform. It is aimed at professional adults.
View all posts by Aerospace Engineering →
This entry was posted in Space Flight and tagged Hubble, instruments, Space, Telescope. Bookmark the permalink.
← Airbus Unveils New ‘Bird of Prey’ Concept Plane
Hurricane Dorian in Action in these Gifs NASA and NOAA Took from Space →