Posted on March 10, 2019 by Aerospace Engineering

Aircraft hydraulic systems can be a challenge to design engineers, due to many constraints that are not encountered when designing a system for in-plant or mobile applications. Hydraulic technology first gained a foothold in aircraft flight control during World War II, when hydraulics was introduced for some secondary systems’ control. However, as aircraft flight performance and capabilities increased, hydraulics began to play a larger role in the critical operation and safety of airliners, helicopters, and high-performance military aircraft. Functions often powered by hydraulics in commercial aircraft include primary flight controls, flap/slat drives, landing gear, nose wheel steering, thrust reversers, spoilers, rudders, cargo doors, and emergency hydraulic-driven electrical generators. 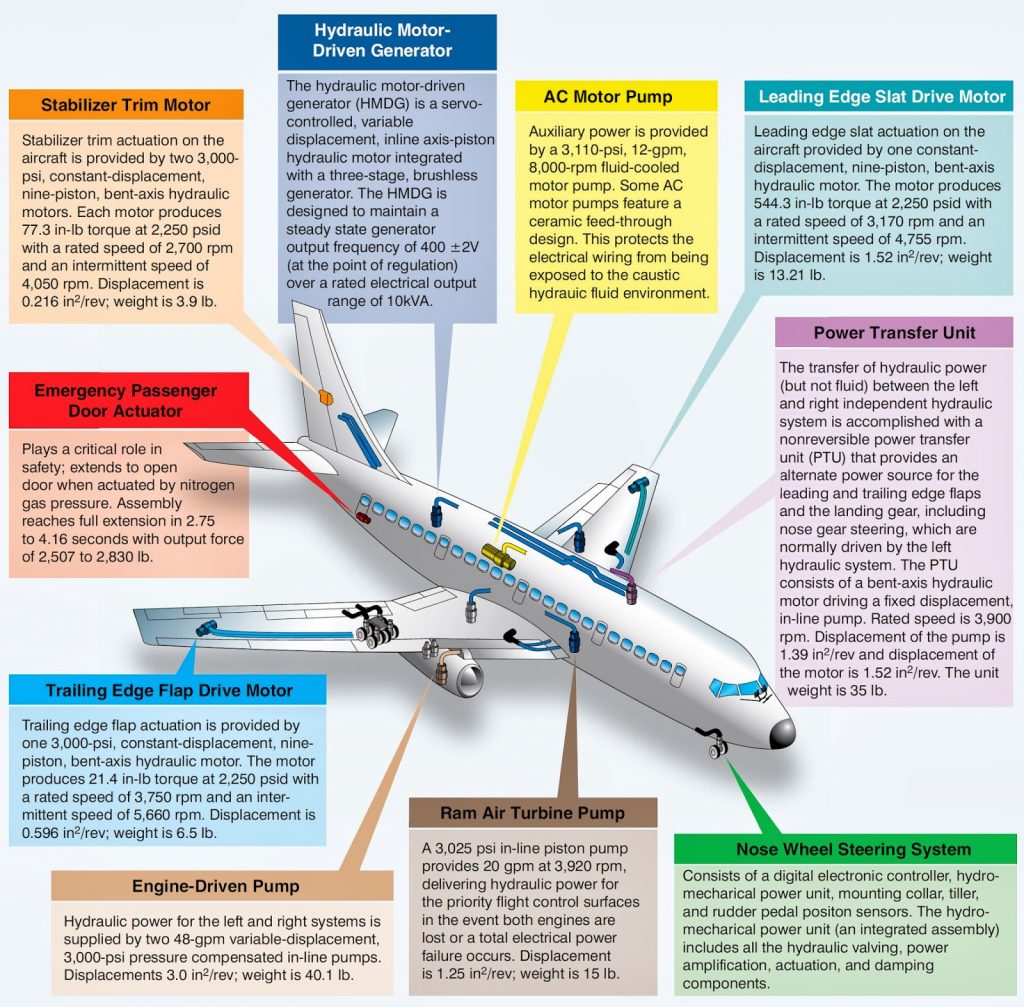 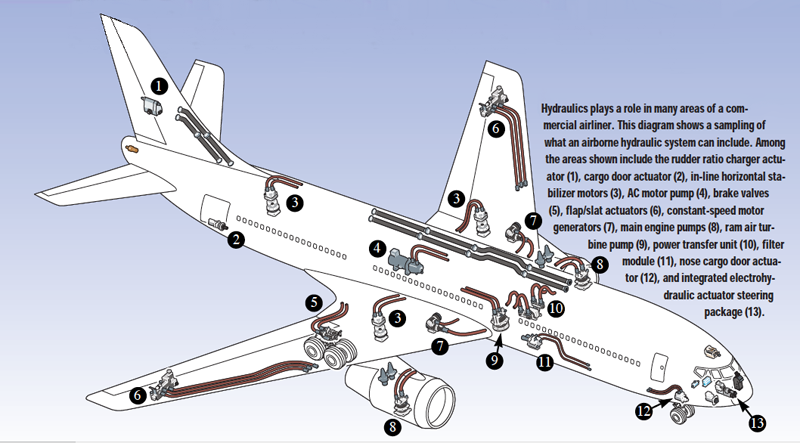 Pressures on aircraft hydraulic systems run higher than on many industrial applications, which generally remain in the 1,500 to 2,000 psi range. Most commercial airliners run at 3,000 psi, with military planes using 4,000 psi systems (although some new military aircraft have made the move to 5,000 psi). The impetus for higher pressures comes from space considerations and the need for light weight, because actuators can generate higher torque forces and power from a smaller envelope.

Not only must the systems deal with the expected variables in ambient temperature that are experienced across the whole of the planet’s surface, but temperatures fall well below zero at an aircraft’s cruising altitude. Most commercial systems are designed to tolerate conditions from –65° to 160° F, while military aircraft can handle a temperature range of –65° to 275° F.

Fluids for high and low temperatures

Fluids used on aircraft have a relatively flat (compared to industrial fluids) viscosity vs. temperature curve — in other words, they are somewhat thin. Additionally, these fluids must be fire resistant, a critical concern when the nearest fire department may be only five miles away — but five miles straight down. One characteristic of aircraft hydraulic fluids that makes them unique is that they remain fluid at –65° F, a temperature at which water- and vegetable-based oils will freeze. The current fluids of choice in the aerospace industry are:

MIL-H-5606 — first introduced over fifty years ago and still used on many aircraft. Used on business jets and many U.S. Air Force aircraft, it is highly flammable and considered responsible for the loss of at least one military aircraft, due to the fire created.

Skydrol and Hyjet — these alkyl phosphate ester based fluids are used on commercial aircraft, and are less flammable than the military fluids described above. Maximum temperature limit is 160° F. These fluids have been around at least since the 1960s.

Great emphasis is placed on maintenance schedules, filtration, and general maintenance of fluid conditions on aircraft. Ed Bush, of Vickers Industrial & Mobile Group, Rochester Hills, Mich., explains, “In industrial applications, the PLC is operating the system, so you design it accordingly. On mobile equipment, who knows who operates it? You hope people who know what they’re doing. On aircraft, the reliability is so critical, you have to throw everything in — redundant systems, very specific maintenance schedules, and stringent guidelines on the components themselves.”

Parts manufactured for use on aircraft do face much tougher guidelines on design, construction, and quality control than those used in most industrial applications. A typical hydraulic pump used on an aircraft may cost between $4,000 and $25,000, compared with a comparable industrial pump’s cost of $400 or less.

Why these extra costs? Consider the following differences on a pump:

Even the packaging of many components is more exotic than with the average industrial component. Phil Galloway, engineering manager, military programs, Vickers Aerospace Marine Defense Fluid Power Div., Jackson, Miss., offers, “Since minimum weight is the single most important objective, it is unlikely that the exact valve is available. Thus, it will most likely need to be modified. Each added valve is usually custom designed to suit its function. Since aircraft quantities are relatively small, modular, low-cost, mass-produced valves are not generally used.”

Bootstrap (pressurized) reservoirs are used on military aircraft to keep the charge inlet of pumps pressurized to prevent cavitation. Imagine the problems that could result if a military fighter used a traditional industrial reservoir and executed a roll. Commercial airliners often use reservoirs with an air charge. Space and weight limitations in aircraft demand that reservoirs be much smaller than they are in conventional hydraulic systems. Reservoir size is optimized for aircraft so that only the amount of fluid needed for proper function is carried. Sizing considerations often include:

There is currently a focus on building quality systems on a system level. As part of this movement, aircraft companies are increasingly looking to component manufacturers to provide complete aircraft hydraulic systems, instead of a myriad of unconnected parts.

The majority of aircraft have three or four redundant hydraulic systems, which are geographically separate in many cases (especially on fighting aircraft, which must be able to survive being hit by enemy fire).

Particularly interesting is the RAT, or Ram Air Turbine. This last-gasp system comes online in an extreme emergency. The RAT is a spring-loaded device usually located near the nose of the plane, which is deployed in case of a total loss of power. The RAT basically consists of a propeller that turns a hydraulic pump – providing enough power to allow the pilot to make rudimentary landing gear and aileron adjustments upon landing. Its only drawback is noise – commonly on the scale of 120 dBA.

When people talk about noise control, they usually aren’t referring to airline hydraulic systems. After all, why bother tweaking a system to achieve a noise level several decibels lower, when the plane’s engines themselves are drowning out any noise that the hydraulics could possibly make? However, aircraft engines have been engineered to run quieter in recent years both in takeoff and landing situations to appease communities in close proximity to airports. Quieter operation is also important during midflight for passenger comfort. Thus, noise has become an important issue in aricraft design.

Regardless of its function and design, every hydraulic system has a minimum number of basic components in addition to a means through which the fluid is transmitted. A basic system consists of a pump, reservoir, directional valve, check valve, pressure relieve valve, selector valve, actuator, and filter. 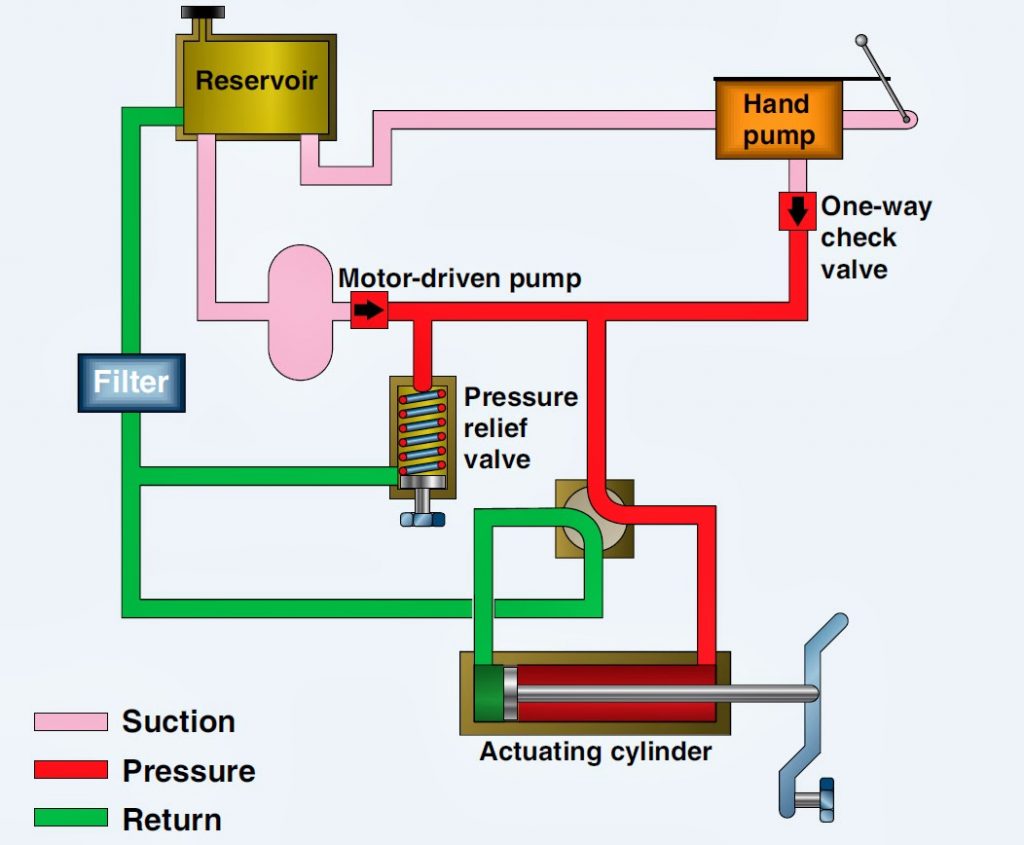 The manually engaged and pressure disengaged type of selector valve is similar to the valve previously discussed. When the actuating mechanism reaches the end of its cycle, the pressure continues to rise to a predetermined pressure. The valve automatically returns to the neutral position and to open center flow. 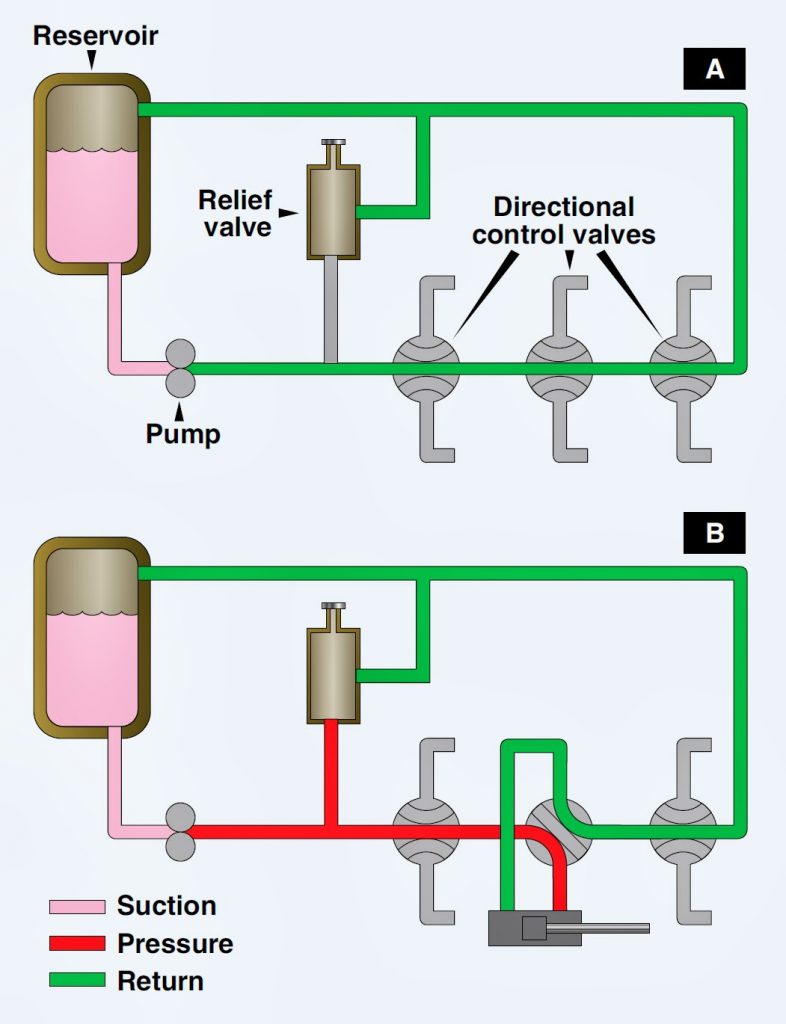 In the closed-center system, the fluid is under pressure whenever the power pump is operating. The three actuators are arranged in parallel and actuating units B and C are operating at the same time, while actuating unit A is not operating. This system differs from the open-center system in that the selector or directional control valves are arranged in parallel and not in series. The means of controlling pump pressure varies in the closed-center system. If a constant delivery pump is used, the system pressure is regulated by a pressure regulator. A relief valve acts as a backup safety device in case the regulator fails.

If a variable displacement pump is used, system pressure is controlled by the pump’s integral pressure mechanism compensator. The compensator automatically varies the volume output. When pressure approaches normal system pressure, the compensator begins to reduce the flow output of the pump. The pump is fully compensated (near zero flow) when normal system pressure is attained. When the pump is in this fully compensated condition, its internal bypass mechanism provides fluid circulation through the pump for cooling and lubrication. A relief valve is installed in the system as a safety backup. An advantage of the open-center system over the closed-center system is that the continuous pressurization of the system is eliminated. Since the pressure is built up gradually after the selector valve is moved to an operating position, there is very little shock from pressure surges. This action provides a smoother operation of the actuating mechanisms. The operation is slower than the closed-center system, in which the pressure is available the moment the selector valve is positioned. Since most aircraft applications require instantaneous operation, closed-center systems are the most widely used.

The Boeing 737 Next Generation has three 3,000 psi hydraulic systems: system A, system B, and standby. The standby system is used if system A and/or B pressure is lost. The hydraulic systems power the following aircraft systems: 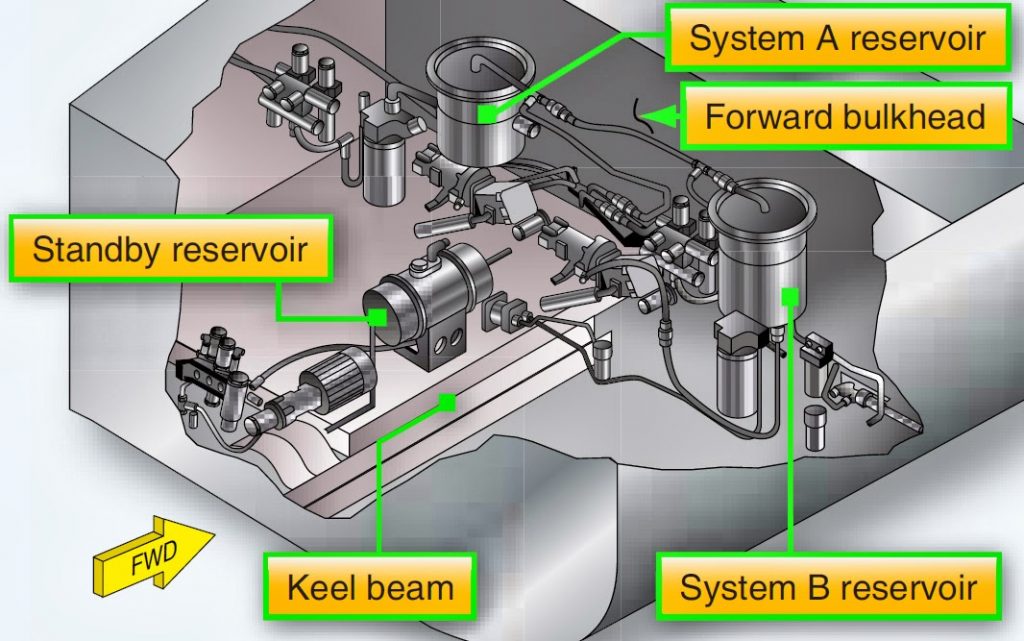 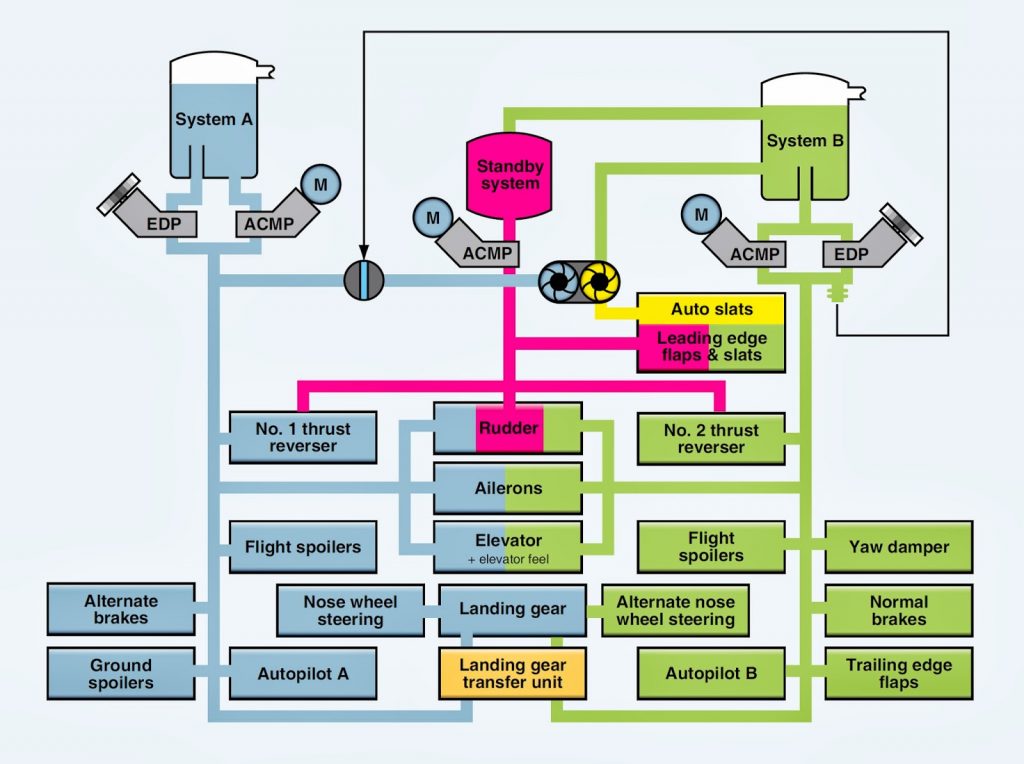 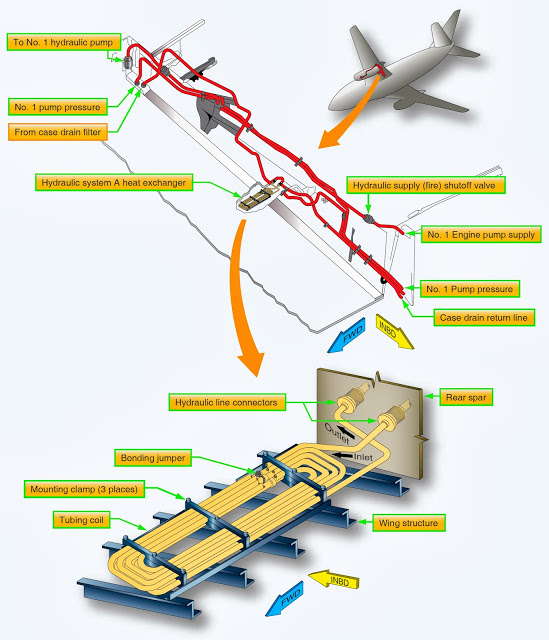 Filter modules are installed in the pressure, case drain, and return lines to clean the hydraulic fluid. Filters have a differential pressure indicator that pops out when the filter is dirty and needs to be replaced.

The standby hydraulic system is provided as a backup if system A and/or B pressure is lost. The standby system can be activated manually or automatically and uses a single electric ACMP to power:

Aerospace Engineering-Training is an online learning platform. It is aimed at professional adults.
View all posts by Aerospace Engineering →
This entry was posted in Aircraft Design and tagged aircraft, Fluids, Hydraulic, Power, system, Valves. Bookmark the permalink.
← How to use the MessageBox (MsgBox)
Powering a Starship With a Black Hole →