Posted on February 9, 2021 by Aerospace Engineering

China’s Tianwen-1 probe has sent back its first image of Mars, the national space agency said, as the mission prepares to touch down on the Red Planet later this year. Tianwen-1 (TW-1) is an interplanetary mission to Mars by the China National Space Administration (CNSA) to send a robotic spacecraft, which consists of an orbiter, deployable camera, lander and a rover. The mission was successfully launched from the Wenchang Spacecraft Launch Site on 23 July 2020 with a Long March 5 heavy-lift rocket, and is currently en route to Mars, expected to reach planetary orbit on 10 February 2021. Tianwen-1 also deployed the TW-1 Deployable Camera (T.D.C.), a small satellite with two cameras that took photos of and tested a Wi-Fi connection with Tianwen-1. Tianwen has so far completed two mid-course orbital corrections and performed self diagnostics on multiple payloads. The spacecraft has begun to conduct scientific operations with the Mars Energetic Particle Analyzer, mounted on the orbiter, which has already transmitted data back to ground control.  Its objectives are to search for evidence of both current and past life, and to assess the planet’s environment. If the rover lands on Mars it will make China the third country to do so after Russia and USA.

The spacecraft, launched in July around the same time as a rival US mission, is expected to enter Mars orbit around February 10.  The black-and-white photo released late Friday by the China National Space Administration showed geological features including the Schiaparelli crater and the Valles Marineris, a vast stretch of canyons on the Martian surface.

The photo was taken about 2.2 million kilometres (1.4 million miles) from Mars, according to CNSA, which said the spacecraft was now 1.1 million kilometres from the planet. The robotic craft ignited one of its engines to “make an orbital correction” Friday and was expected to slow down before being “captured by Martian gravity” around February 10, the agency said. 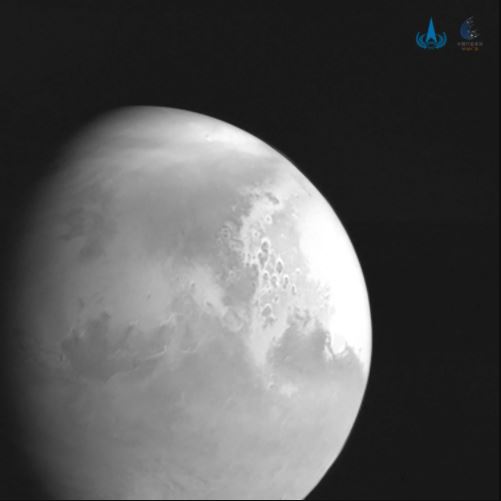 The five-tonne Tianwen-1 includes a Mars orbiter, a lander and a rover that will study the planet’s soil. China hopes to ultimately land the rover in May in Utopia, a massive impact basin on Mars. After watching the United States and the Soviet Union lead the way during the Cold War, China has poured billions of dollars into its military-led space programme. It has made huge strides in the past decade, sending a human into space in 2003. The Asian powerhouse has laid the groundwork to assemble a space station by 2022 and gain a permanent foothold in Earth orbit.

But Mars has proved a challenging target so far, with most missions sent by the United States, Russia, Europe, Japan and India to the planet since 1960 ending in failure. Tianwen-1 is not China’s first attempt to reach Mars. A previous mission with Russia in 2011 ended prematurely as the launch failed. China has already sent two rovers to the Moon. With the second, China became the first country to make a successful soft landing on the far side. All systems on the Tianwen-1 probe are in “good condition,” CNSA said Friday.

Aerospace Engineering-Training is an online learning platform. It is aimed at professional adults.
View all posts by Aerospace Engineering →
This entry was posted in News and tagged 1, China, first, from, Mars, of, Photo, probe, Tianwen. Bookmark the permalink.
← Discoverd a Strange New Form of Magnetism Within Graphene
‘Uncrackable’ Quantum Message sent to Space by Chinese researchers →