Posted on February 16, 2021 by Aerospace Engineering

Mars may not have a lot going on at the moment, life-wise, but the dusty red planet may not be as inhospitable as it seems. New experiments have shown that cyanobacteria (aka blue-green algae) can successfully grow in Martian atmospheric conditions.

A few more ingredients are required, of course, but it’s a significant step towards cyanobacteria-based life support systems for human habitats when we finally make our way over there. “Here we show that cyanobacteria can use gases available in the Martian atmosphere, at a low total pressure, as their source of carbon and nitrogen,” said astrobiologist Cyprien Verseux of the University of Bremen in Germany. “Under these conditions, cyanobacteria kept their ability to grow in water containing only Mars-like dust and could still be used for feeding other microbes. This could help make long-term missions to Mars sustainable.”

Here on Earth, cyanobacteria isn’t always the most compatible with other life. It can be found in almost every habitat on the planet, and sometimes produces powerful toxins that can kill other organisms. Yet we might not be here without it. Scientists believe that a cyanobacteria boom 2.4 billion years ago was largely responsible for our breathable atmosphere. When it exploded onto the scene, cyanobacteria pumped the atmosphere with oxygen, dramatically altering the entire planet.

All species of cyanobacteria produce oxygen as a photosynthetic by-product, and they are an invaluable source of it, even today.

For some years, scientists have been considering if and how we might harness cyanobacteria’s ability to make oxygen in order to live on Mars (and in space).

This would carry additional benefits. Mars’ atmosphere is made up of mostly carbon dioxide (95 percent) and nitrogen (3 percent), both of which are fixed by cyanobacteria, converting them into organic compounds and nutrients respectively.

So Verseux and his team sought a middle ground. They developed a bioreactor called Atmos that has atmospheric pressure around 10 percent of that of Earth, but uses only what can be found on Mars, although in inverted proportions: 96 percent nitrogen and 4 percent carbon dioxide.

Also included in the bioreactor was water – which can be obtained on Mars from melted ice, which is abundant on the surface in certain places – and a Martian regolith simulant, a mixture of minerals created here on Earth using only what can be found on Mars.

The system, comprising nine glass-and-steel vessels, was carefully temperature- and pressure-controlled, and monitored at all times. 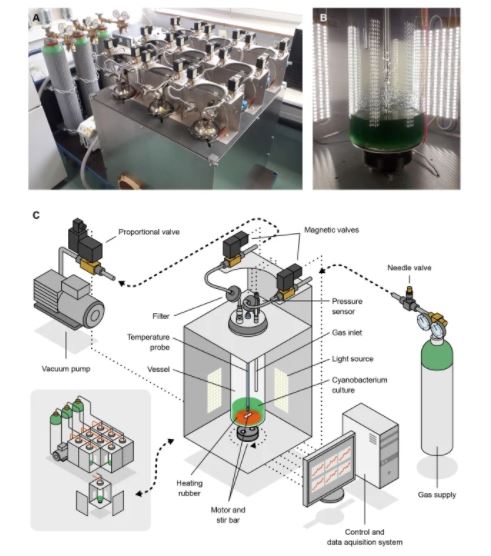 The team selected a species of nitrogen-fixing cyanobacteria that preliminary tests showed would be most likely to thrive under these conditions, Anabaena sp. PCC 7938, and tested it under a variety of conditions. Some chambers used a culture medium to grow the cyanobacteria, while others used simulated Mars regolith. Some were exposed to Earth atmospheric pressure, while others were reduced to low pressure.

The scientists found that not only did their Anabaena grow, it did so “vigorously”. Obviously it grew better on the culture medium than on the Mars regolith, but the fact that it grew at all on the regolith constitutes a massive success – indicating that the growth of cyanobacteria on Mars would not have to rely on imported ingredients from Earth.

Next, to assess whether the cyanobacteria grown in Martian conditions could continue to be useful, the researchers dried it and used it as a substrate to grow Escherichia coli. This showed that sugars, amino acids, and other nutrients can be obtained from the cyanobacteria to feed other cultures, which can then be used for other purposes, such as producing medications.

There is, of course, much more work to be done.

Atmos was designed to test whether cyanobacteria could be grown under certain atmospheric conditions, not to maximise efficiency, and the parameters of the bioreactor will depend on many factors in the Mars mission, including the mission payload and architecture. Anabaena may not even be the best cyanobacteria for the job.

Now that the concept has been proven, though, the team can get to work optimising a bioreactor system that may, one day, keep us alive on Mars.

“Our bioreactor, Atmos, is not the cultivation system we would use on Mars: it is meant to test, on Earth, the conditions we would provide there,” Verseux said.

“But our results will help guide the design of a Martian cultivation system… We want to go from this proof-of-concept to a system that can be used on Mars efficiently.” The research has been published in Frontiers in Microbiology.

Aerospace Engineering-Training is an online learning platform. It is aimed at professional adults.
View all posts by Aerospace Engineering →
This entry was posted in Technology & Science and tagged Algae, Alive, Bremen, could, Green, Help, Humans, Keep, Mars, nitrogen, on. Bookmark the permalink.
← What is the Mars Rover Perseverance Mission?
The 1st photo from Mars taken by NASA’s Perseverance rover →