What is the Mars Rover Perseverance Mission?

Posted on February 16, 2021 by Aerospace Engineering

The landing of NASA’s next Mars rover is on February 18 2021. The car-size Perseverance rover, the centerpiece of NASA’s $2.7 billion Mars 2020 mission, will hunt for signs of ancient life, collect and cache samples for future return to Earth and help demonstrate a variety of new exploration technologies, among other tasks.

But before it can get started on any of that groundbreaking work, Perseverance must ace its touchdown inside Mars’ Jezero Crater on Feb. 18. There’s no guarantee that the rover will survive this harrowing ordeal; over the years, just 40% of all Mars surface missions have landed successfully.

That depressing figure is skewed by a lot of failures in the first few decades of the Space Age, however. NASA’s recent Red Planet track record is quite encouraging (knock on wood), and Mars 2020 will employ a proven landing strategy — the “sky crane” technique used successfully by its predecessor, the Curiosity rover, which touched down in August 2012 and remains active today.

Here’s a brief rundown of the Mars 2020 mission and its upcoming entry, descent and landing (EDL) operations to get you ready for the big day.

An artist’s illustration of NASA’s Mars rover Perseverance landing on the Red Planet using a sky crane similar to that of the Curiosity rover in 2012. (Image credit: NASA/JPL-Caltech)

Perseverance will also help bring the Mars life hunt down to Earth. The rover will collect and store several dozen samples, which a joint NASA-European Space Agency campaign will haul to our planet as early as 2031. Once the pristine Mars material is on the ground, scientists in labs around the world can scrutinize it using far more powerful and precise equipment than a single rover can carry to the Red Planet. 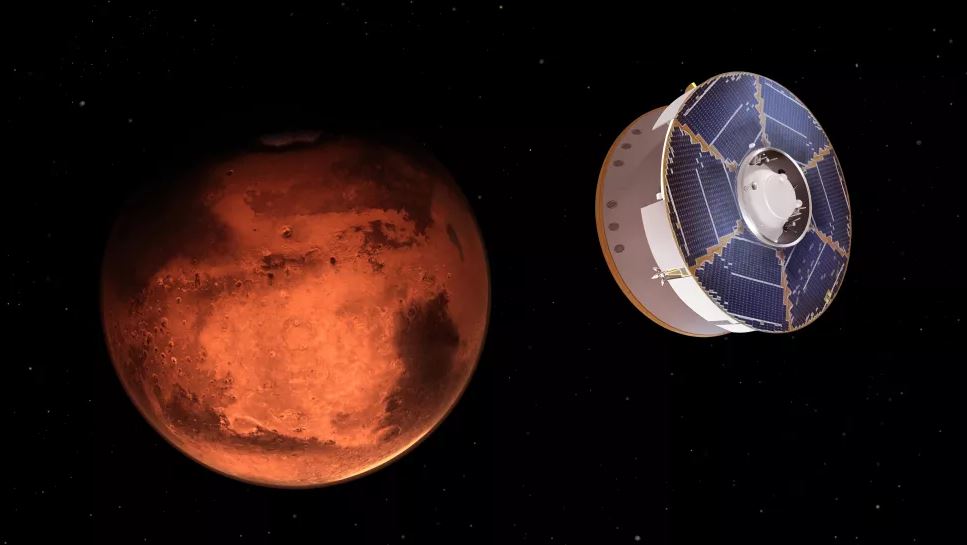 
Typically, a trip to Mars, which is about 300 million miles away, takes about seven-eight months. Perseverance was launched on July 30, 2020 during the window when Mars and Earth were the closest to each other. This window is important since the two planets orbit around the Sun at different speeds and every two years, the planets are in a position where they are the closest to each other. Space agencies look to launch their spacecraft during this window since the closer distance means using less rocket fuel. According to an analysis done by Purdue University, the cost of solid rocket propellant is estimated at $5 per kg. However, the car-sized Perseverance rover is using a nuclear-powered system. In nearly 30 years, it will become the first rover to use domestically produced plutonium created by national laboratories in the US. The rover will be powered by a generator that will convert heat generated by the natural decay of plutonium-238 into electricity, which will keep the rover and its tools running once it lands on Mars.

Mars 2020 also has a big technology-demonstration component. For example, a tiny helicopter named Ingenuity is flying to the Red Planet on Perseverance’s belly. In the early days of the Mars 2020 mission, which is scheduled to last at least one Mars year (about 687 Earth days), Ingenuity will make a few test flights, trying to become the first rotorcraft ever to fly on a world beyond Earth. Success could open Mars to extensive aerial exploration in the future, NASA officials have said. The 2,260-lb. (1,025 kilograms) Perseverance is also carrying an instrument called MOXIE, which is short for “Mars Oxygen In-Situ Resource Utilization Experiment.” (And ISRU stands for “in situ resource utilization.”) MOXIE will generate oxygen from the thin, carbon dioxide-dominated Martian atmosphere, showcasing tech that, if scaled up, could help humanity get a foothold on the Red Planet, NASA officials have said.

What will the Perseverance rover do on Mars?

Perseverance will spend one Mars year (two years on Earth) on the planet during which it will explore the landing site region. The Jezero crater where it will land was once the site of an ancient river delta (scientists know this because of evidence collected during previous landed and orbital missions that point to wet conditions on the planet billions of years ago).

If Mars once harboured a warmer atmosphere enabling water to flow in its ancient past (3.5-3.8 billion years ago), and if microbial life existed on it, it is possible that it exists in “special regions” even today.

The rover is carrying with it seven instruments, which include an advanced camera system with the ability to zoom, a SuperCam, which is an instrument that will provide imaging and chemical composition analysis and a spectrometer. One of the most interesting instruments aboard the rover, however, is called MOXIE, which will produce oxygen from Martian atmospheric carbon dioxide. If this instrument is successful, then future astronauts (as of now, no human has kept foot on Mars) can use it to burn rocket fuel for returning to Earth.

The rover will also carry Ingenuity, the first helicopter to fly on Mars. This will help collect samples from the surface from locations where the rover cannot reach. Overall, the rover is designed to study signs of ancient life, collect samples that might be sent back to Earth during future missions and test new technology that might benefit future robotic and human missions to the planet.

What is the cost of the Perseverance mission?

NASA is estimated to spend $2.7 billion on the mission, which includes spacecraft development, launch operations and the costs of maintaining operations once it lands on Mars.

According to The Planetary Society, using plutonium-238 as fuel has driven up the cost of the mission since nuclear material is linked to elevated environmental and safety regulations. The total cost of the mission is equivalent to the amount of money Google makes in six days, or the amount of money Americans spend on their pets every 10 days or equivalent to 33 hours of running the US Department of Defense, the society says.

Aerospace Engineering-Training is an online learning platform. It is aimed at professional adults.
View all posts by Aerospace Engineering →
This entry was posted in News and tagged is, Mars, mission, Nasa, Perseverance, probe, Rover, Space, The, What. Bookmark the permalink.
← New Device turns the Body into a Battery
Green Algae Could Help Keep Humans Alive on Mars →