Incredible tests for the wings of an A350 XWB plane

Posted on February 6, 2016 by Aerospace Engineering

Airbus has released a video showing how its A350 XWB plane’s wings are highly flexible when put under stress tests, proving they are incredibly unlikely to ever snap in two. These modern aircraft wings, which are often made of aluminium, are designed to deliver the best aerodynamic performance, while being exceptionally strong and light. This means they are super flexible, which is necessary when taking off as the wings provide lift, and make for a smooth flight in strong gusts of wind, or dreaded turbulence.

The design of the flexible wings is inspired by nature. ‘If you see a bird fly and it is in turbulent air, its wings bend in both directions upwards and downwards as the bird flies in the air,’ Mr Brown said. In the video, the wings of the A350 are subjected to ‘extreme’ static ground testing in a vast aircraft hangar.  This hangar is described by test manager Emmanuel Bodin as ‘more of a prison, since we will torture [the plane] a lot of times.’The wings are pushed to the limit by a mechanical loading device that forces them upwards and downwards, to simulate ‘critical situations’ and the 12000 sensors installed feed back any signs of weakness to engineers. 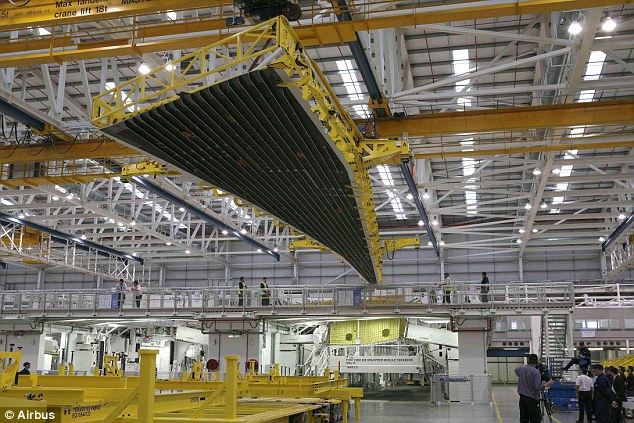 In the vigorous test, the wing bends, or is displaced, by an incredible 5.2 metres showing its incredible flexibility. Mr Brown explained that composite materials are used to align with the forces that the wing experiences during the different stages of the flight as well as on the ground. ‘Today through modern computing techniques and extensive testing we can constantly improve the designs and achieve optimum lightweight and flexible structures,’ he said. All modern aircraft wings are tested to the maximum ‘once in a life-time’ forces that they could possibly experience plus a safety factor to give what are called ultimate loads. Mr Brown said: ‘Wings are tested to ultimate loads and we always test beyond ultimate loads to establish the margins that we have.’ Airbus said it tests the wings to beyond the maximum forces that an aircraft may possibly experience in its life, which includes scenarios such as turbulence and hard landings. The wings are tested to destruction, they’re designed to find out all the problems that could develop in flight. Furthermore, new planes go though routine inspections, he explained, so that any problems are picked up. They’re built to a fail-safe philosophy so there’s always a back-up or Plan B.

Aerospace Engineering-Training is an online learning platform. It is aimed at professional adults.
View all posts by Aerospace Engineering →
This entry was posted in News and tagged A350, Incredible, plane, tests, wings, XWB. Bookmark the permalink.
← UCAV study begins to take shape
New revolutionary fast robot to build the composite wings of Boeing 777X →