Posted on January 10, 2014 by Aerospace Engineering

>> Composite Analysis Tool
In the presence of a biaxial stress state, the mechanical behavior of a lamina orthotropic (Figure 3) is uniquely defined by the 4 constants EL, ET, GLT, νLT, (ν is not an independent parameter). 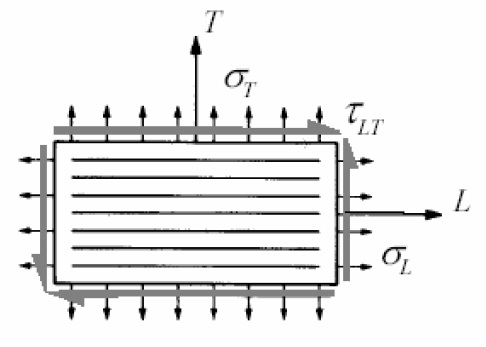 The relations between these elastic constants and the terms of the matrix of elasticity is obtained by considering the plate subjected to a uniaxial tension directed along the principal directions and for a state of pure shear. For a uniaxial stress along the longitudinal direction we have:

that resolved with respect to deformations provide:

Thus taking account the definition of Young’s modulus and Poisson’s ratio, from the above equations we get:

Considering instead a uniaxial stress in the transverse direction, with the same procedure we obtain:

considering a pure shear stress, we have:

from which we obtain: 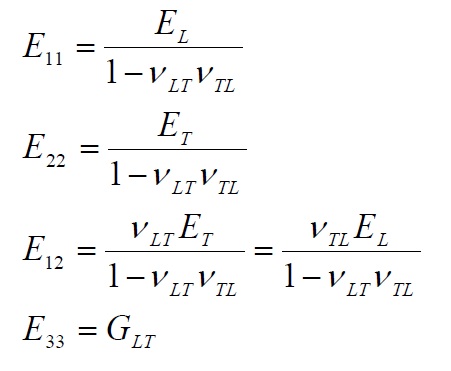 According to (23), the two main Poisson ratios (major and minor) are in practice related to the Young’s modulus by the relation:

The result that of the 5 elastic constants present in the second member of (21-24) only 4 are independent. Using (21-24) and taking into account the relation (10) we obtain immediately the relations between the terms of the inverse matrix of elasticity and elastic constants: 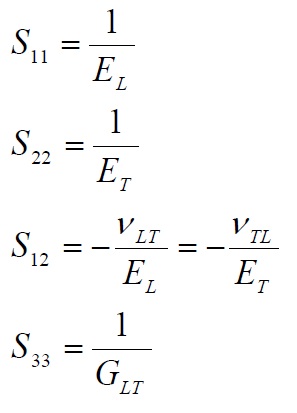 Finally, in the planar case the matrix of elasticity direct and inverse assume the form:

The transverse isotropy GTT’ is related to the Poisson’s ratio νTT’ and the Young’s modulus ET by the formula identical to that for the isotropic:

Aerospace Engineering-Training is an online learning platform. It is aimed at professional adults.
View all posts by Aerospace Engineering →
This entry was posted in Classical theory of Laminates and tagged between, CONSTANTS, elastic, elasticity, Lamina, Matrix, Orthotropic, Relationships. Bookmark the permalink.
← 1.2. Hooke’s Law
1.4. Matrix of elasticity in a cartesian reference →