Posted on March 10, 2021 by Aerospace Engineering

The 2020 is the worst year in the history of air transport according to the IATA (International Air Transport Association). A drop in global passenger traffic by -65.9% compared to 2019, with -75.6 % for international flights and -48.8% for domestic ones. “Last year was a catastrophe”, says Alexandre de Juniac, director general of IATA: “the timid recovery that took place in the northern hemisphere during the summer did nothing against the new autumn stop and the almost total absence of passengers during the Christmas holidays ».

MAYDAY! To make matters worse, the fact that there is still no light at the end of the tunnel: IATA predicts that 2021 will be another disastrous year for airlines, after a January in which bookings have dropped by 70% compared to the same period in 2020. Passengers face a series of uncoordinated and rapidly changing global restrictions, explains de Juniac, who calls on governments to help the sector. 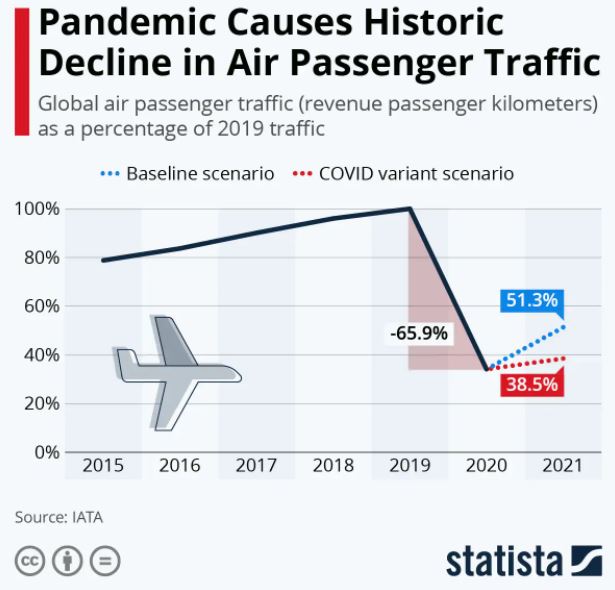 The graph illustrates the global trend in passenger air traffic, calculated using the RPK (passenger revenue kilometers, a value that indicates the number of passengers transported for each kilometer flown) as the unit of measurement, compared to 2019. The blue dotted line shows the most optimistic forecasts for 2021, while the red one predicts the trend influenced by the spread of the new variants of the coronavirus.

Aerospace Engineering-Training is an online learning platform. It is aimed at professional adults.
View all posts by Aerospace Engineering →
This entry was posted in News and tagged Air, COVID, COVID-19, covid19, Economy, effects, of, on, pandemic, The, Traffic. Bookmark the permalink.
← SpaceX Successfully Landed Starship For The First Time – Before It Exploded