SLS vs Starship / SpaceX vs Nasa : who will get us to the Moon first?

Posted on February 7, 2021 by Aerospace Engineering

No-one has visited the Moon since 1972. But with the advent of commercial human spaceflight, the urge to return is resurgent and generating a new space race. Nasa has selected the private company SpaceX to be part of its commercial spaceflight operations, but the firm is also pursuing its own space exploration agenda. To enable flights to the Moon and beyond, both Nasa and SpaceX are developing new heavy lift rockets: SpaceX’s Starship and Nasa’s Space Launch System. But how do they differ and which one is more powerful?

Rockets go through multiple stages to get into orbit. By discarding spent fuel tanks while in flight, the rocket becomes lighter and therefore easier to accelerate. Once in operation, SpaceX’s launch system will be comprised of two stages: the launch vehicle known as Super Heavy and the Starship.

Super Heavy is powered by the Raptor rocket engine, burning a combination of liquid methane and liquid oxygen. The basic principle of a liquid fuel rocket engine is that two propellants, – a fuel such as kerosene and an oxidiser such as liquid oxygen – are brought together in a combustion chamber and ignited. The flame produces hot gas under high pressure which is expelled at high speed through the engine nozzle to produce thrust.

The rocket will provide 15 million pounds of thrust at launch, which is approximately twice as much as the rockets of the Apollo era. Atop the launcher sits the Starship, itself powered by another six Raptor engines and equipped with a large mission bay for accommodating satellites, compartments for up to 100 crew and even extra fuel tanks for refuelling in space, which is critical to long duration interplanetary human spaceflight. 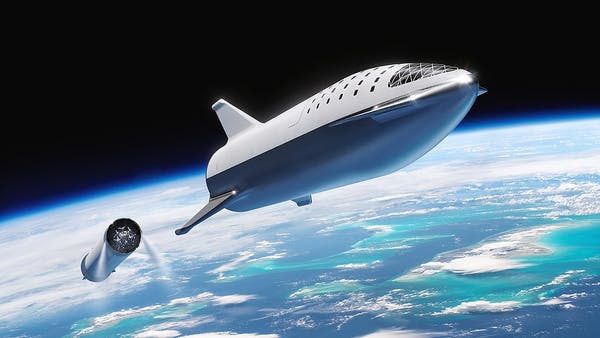 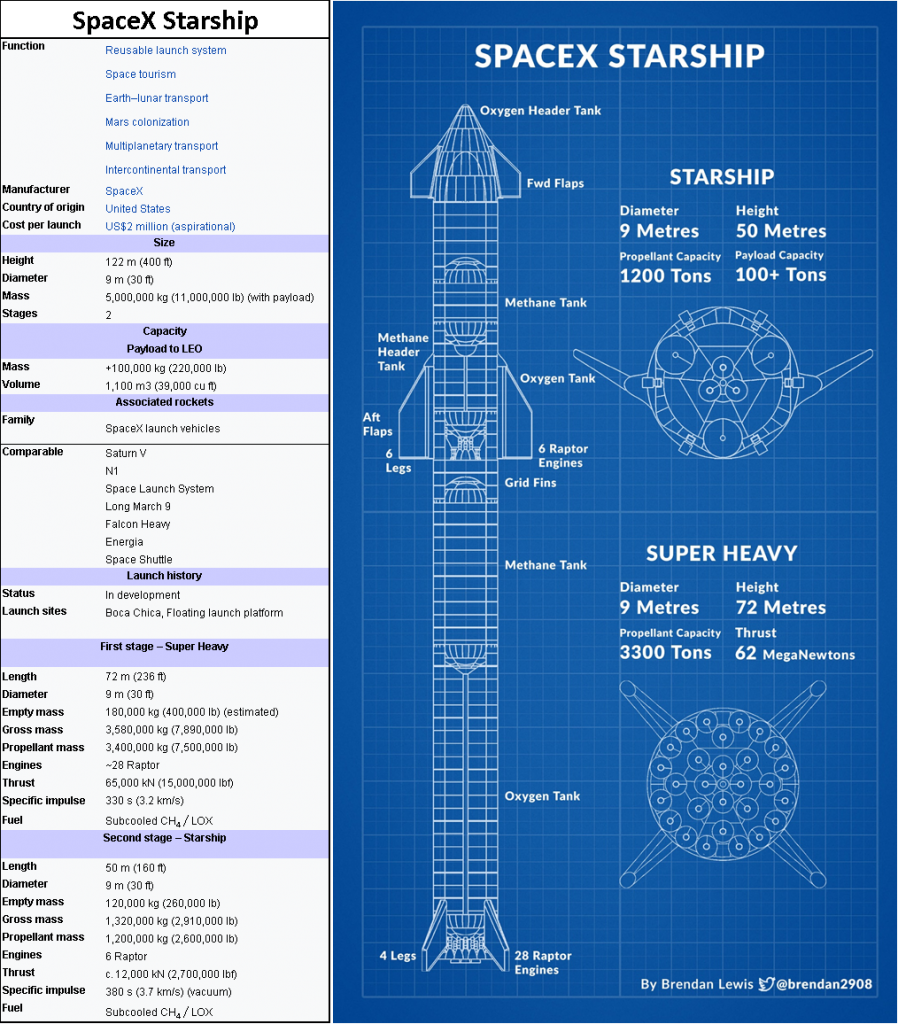 The Starship is designed to operate both in the vacuum of space and within the atmospheres of Earth and Mars, using small moveable wings to glide to a desired landing zone.

Once over the landing area, the Starship flips into a vertical position and uses its on-board Raptor engines to make a powered descent and landing. It will have sufficient thrust to lift itself off the surface of Mars or the Moon, overcoming the weaker gravity of these worlds, and return to Earth – again making a powered soft landing. The Starship and Super Heavy are both fully reuseable and the entire system is designed to lift more than 100 tons of payload to the surface of the Moon or Mars.

The spacecraft is maturing rapidly. A recent test flight of the Starship prototype, the SN8, successfully demonstrated a number of the manoeuvres required to make this work. Unfortunately, there was a malfunction in one of the Raptor engines and the SN8 crashed on landing. Another test flight is expected in the coming days.

The Space Launch System (SLS) from Nasa will be taking the crown from the discontinued Saturn V as the most powerful rocket the agency has ever used. The current incarnation (SLS block 1) stands at almost 100 metres tall. The SLS core stage, containing more than 3.3 million litres of liquid hydrogen and liquid oxygen (equivalent to one-and-a-half Olympic size swimming pools), is powered by four RS-25 engines, three of which were used on the previous Space Shuttle. Their main difference from the Raptors is that they burn liquid hydrogen instead of methane. 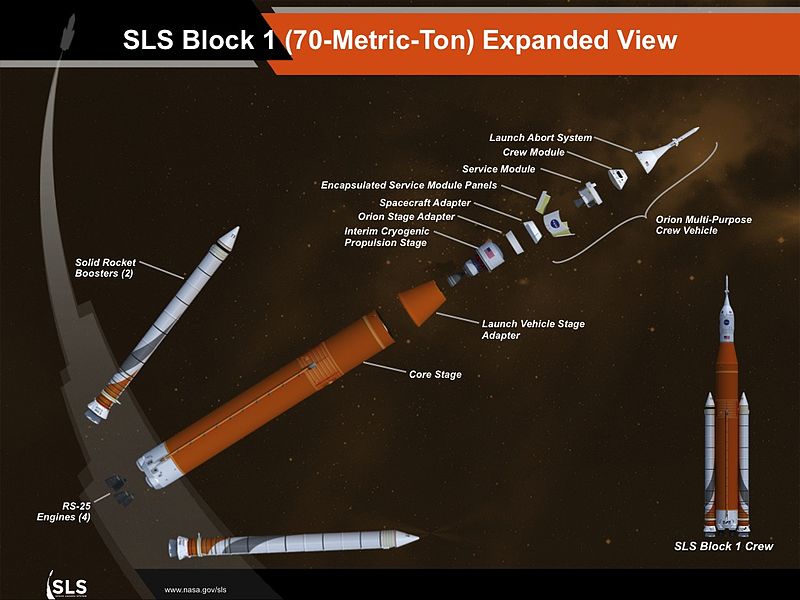 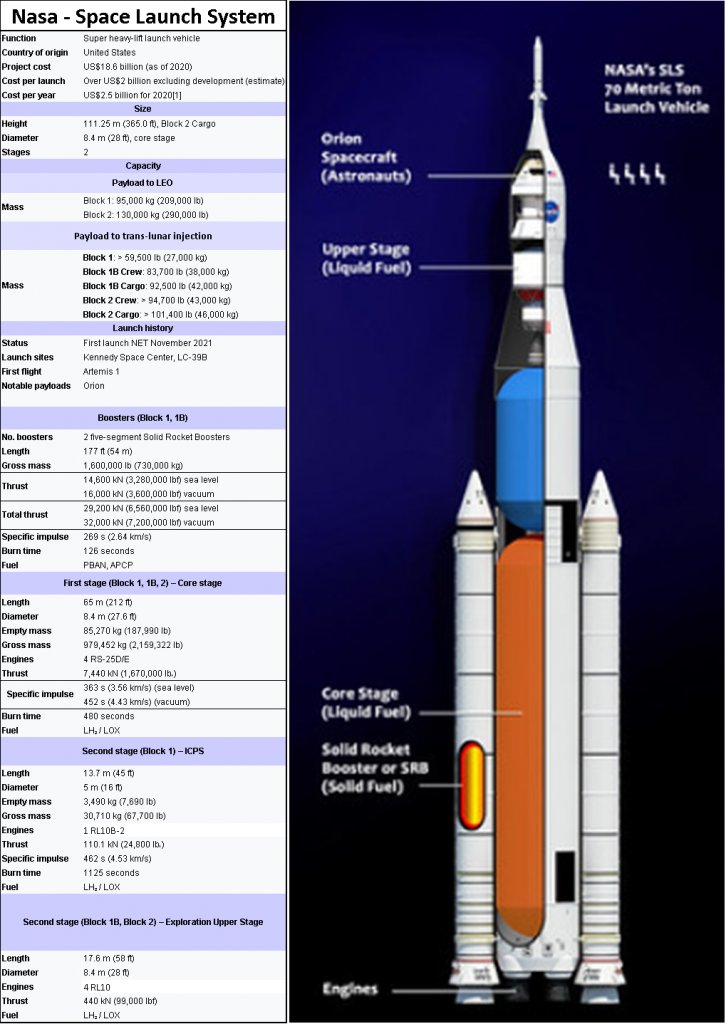 The core stage of the rocket is augmented by two solid rocket boosters, attached to its sides, providing a total combined thrust of 8.2 million pounds at launch – about 5% more than the Saturn V at launch. This will lift the spacecraft to low Earth orbit. The upper stage is intended to lift the attached payload – the astronaut capsule – out of Earth’s orbit and is a smaller liquid fuel stage powered by a single RL-10 engine (already in use by ATLAS and DELTA rockets) which is smaller and lighter than the RS-25. The Space Launch System will send the Orion crew capsule, which can support up to six crew for 21 days, to the Moon as part of the Artemis-1 mission – a task that current Nasa rockets are currently not capable of performing. It is intended to have large acrylic windows so astronauts can watch the journey. It will also have its own engine and fuel supply, as well as secondary propulsion systems for returning to the Earth. Future space stations, such as the Lunar Gateway, will serve as a logistical hub, which may include refuelling. The core stage and booster rockets are unlikely to be reusable (instead of landing they will drop in the ocean), so there is a higher cost with the SLS system, both in materials and environmentally. It is designed to evolve to larger stages capable of carrying crew or cargo weighing up to 120 tonnes, which is potentially more than Starship. 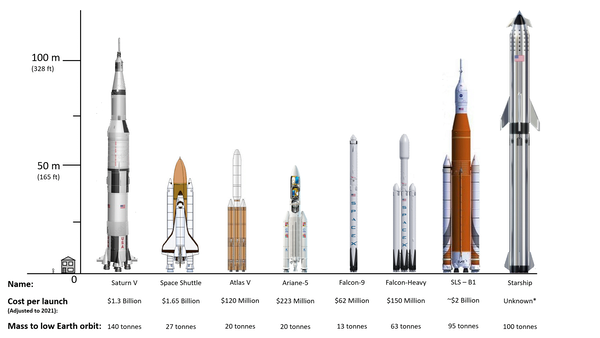 NASA’s SLS and SpaceX’s Starship, on the right, could both get us to the Moon and beyond. Ian Whittaker/NASA/SpaceX, Author provided

A lot of the technology being used in SLS is so-called “legacy equipment” in that it is adapted from previous missions, cutting down the research and development time. However, earlier this month, a test fire of the SLS core stage was stopped a minute into the eight-minute test due to a suspected component failure. No significant damage occurred, and the SLS program manager, John Honeycutt, stated: “I don’t think we’re looking at a significant design change.”

So which spacecraft likely to reach carry a crew to the Moon first? Artemis 2 is planned as the first crewed mission using SLS to perform a flyby of the Moon and is expected to launch in August 2023. Whereas SpaceX has no specific date planned for crewed launch, it is running #dearMoon – a project involving lunar space tourism planned for 2023. Musk has also stated that a crewed Martian mission could take place as early as 2024, also using Starship.

Ultimately it is a competition between an agency that has had years of testing and experience but is limited by a fluctuating taxpayer budget and administration policy changes, and a company relatively new to the game but which has already launched 109 Falcon 9 rockets with a 98% success rate and has a dedicated long-term cash flow. Whoever reaches the Moon first will inaugurate a new era of exploration of a world which still has much scientific value.

Aerospace Engineering-Training is an online learning platform. It is aimed at professional adults.
View all posts by Aerospace Engineering →
This entry was posted in News and tagged Elon, moon, musk, Nasa, rocket, rockets, SLS, Spaceflight, SpaceX. Bookmark the permalink.
← SpaceX vs. NASA: Who is the Best Right Now ?
Industrial Robots programed by AI →