The private launch company Rocket Lab unveiled its plans to launch a big, new rocket called Neutron by 2024 on Monday (March 1), turning away from its longstanding commitment to launch tiny satellites exclusively on small boosters.

The pivot comes as the company prepares to go public following a planned merger with Vector Acquisition Corporation. Scaling up from the company’s standby Electron rocket marks the second recent change of plans toward long-scorned opportunities and is meant to take advantage of burgeoning interest in establishing megaconstellation networks of satellites, like SpaceX’s Starlink. The Neutron rocket will also be capable of launching astronauts, Rocket Lab said. “There are some things we said we would never do, but we’re going to build a big rocket,” Rocket Lab CEO Peter Beck said in a video announcing Neutron released on March 1.

Last year, the company began working toward making Electron reusable, a path it long said it would not take. Beck had flippantly promised to eat his hat should the company move toward reusability, hence scenes of him chopping up a Rocket Lab baseball cap in a blender before appearing to consume a pinch of the fibers.(Please, don’t try this at home.)

The Neutron rocket will stand 130 feet tall (40 meters) and be able to launch payloads of up to 8 metric tons (18,000 lbs. or 8,000 kilograms) to low Earth orbit and deliver up to 4,400 lbs. (2,000 kg) to the moon. An illustration of Neutron shows what appear to be landing legs to recover the booster after launch, a method similar to that used by SpaceX’s Falcon 9 rockets. 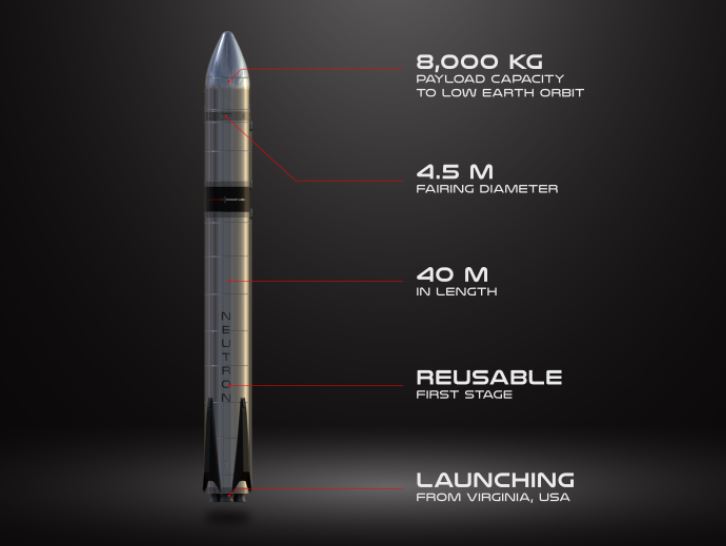 For comparison, Rocket Lab’s Electron booster is 59 feet tall (18 m) and can carry payloads of just over 660 lbs. (300 kg) for small satellite launches. Rocket Lab aims to recover Electron boosters by having them parachute to Earth and catching them in mid-air with a helicopter.

Neutron will fly in 2024, according to the announcement, and will be both reusable and rated for human spaceflight, Beck said in the video, in which he stands inside half of the future rocket’s fairing, or nosecone. The rocket will launch from the company’s new pad at NASA’s Wallops Flight Facility in Virginia, where the company also plans to launch future Electron missions.

Rocket Lab’s primary launch site, Launch Complex 1, on the Māhia Peninsula in New Zealand, where the company is building a second pad near its main launching ground. The U.S. launch site is designated Launch Complex 2.
Rocket Lab’s next mission, called “They Go Up So Fast,” is scheduled to launch from New Zealand later this month. It will carry seven small satellites for a variety of commercial and government customers, including the U.S. Army’s Space and Missile Defense Command. The mission will fly Rocket Lab’s Photon Pathstone spacecraft to test technologies for a moon mission for NASA launching later this year.

The Neutron announcement comes as Rocket Lab merges with Vector Acquisition Corporation. When the two companies finalize the arrangement later this year, the resulting company, which will use the Rocket Lab name, will be listed on the Nasdaq stock exchange, according to a statement from the companies. The deal values Rocket Lab at just over $4 billion.

Aerospace Engineering-Training is an online learning platform. It is aimed at professional adults.
View all posts by Aerospace Engineering →
This entry was posted in News and tagged a, big, called, for, Lab, Neutron, new, Plans, rocket, Unveiled. Bookmark the permalink.
← The New Chinese rocket will be the most Powerful Ever, Long March 9
Ground testing for NASA’s all-Electric X-57 →